Warrior Wednesday: I get my rear in gear for caregivers, because of Betty Jo and Tony Snow

By Lindsey ZimmermannNovember 23, 2011Get Your Rear in Gear, Stories, Why I Get My Rear in Gear

Get Your Rear in Gear Philadelphia co-chair/caregiver Betty Jo Snow as a nurse

I was just a little girl when my mom got sick.  In that day and age, if people spoke of “the ‘c’ word” at all, it was in hushed whispers.  I didn’t realize how sick she was, or have any sense that I might grow up without her.  When I was 9 years old, mom lost her fight with colon cancer.  She was way too young to die.  She left us before she reached her 40th birthday, leaving behind a devastated husband and three children ranging in age from 9 to 17.  It left a hole in all of our hearts, and was the defining event of my young life.

As a young adult, I began to experience some digestive issues of my own, and was ultimately diagnosed with Ulcerative Colitis, which I learned puts me at a greater risk for developing colon cancer.  I learned that my brother Tony also had colitis – but his symptoms were much worse than mine.  He and I spoke often of the risk that tied us together, and our own deep the fears that cancer could one day catch us, as it had our mother. The Snow Family in early 70’s

Tony did everything he was supposed to do to prevent colon cancer.  He had annual colonoscopies, took medication for his colitis, exercised regularly and ate a healthy diet.  What did he do right? Everything!

In 2005, at the age of 50, while he was working for Fox News cancer found him.   During his annual screening that year, the mass was discovered, and it was already Stage III – an unusually aggressive tumor in the world of colon cancer.  The entire family was again devastated, and the news stirred up all of the emotions around losing our mother at a young age, and fear that we would lose Tony, too.  Tony assured us that he had fantastic doctors (he did), and that he would do everything in his power fight and beat the disease.

Initially, Tony seemed to respond well to the treatment.  Post-surgery he regained weight, and seemed strong and healthy.  We all collectively breathed a sigh of relief, and allowed ourselves to feel cautiously optimistic about his chances.  We all believed, or at least wanted to believe, that he would be the one to beat it. Tony Snow smiles as he is introduced by President Bush as his new Press Secretary on April 26, 2006. AP Photo/Gerald Herbert

About a year after his initial diagnosis and treatment, Tony was contacted by the White House and asked if he would consider serving as Press Secretary – the job of his dreams.  He knew that taking the job would be a risk – it would pay significantly less than his television job, and there were no guarantees about his future health.  After much consideration, and with the blessings of his family, he took the job, and was never happier.

Another year later, Tony discovered that the cancer was back.   Ultimately, he had to decide to leave the White House.  Tony had remained optimistic about his chances beating cancer to the bitter end.  His positive attitude and strong faith in the face of the disease was and is an inspiration to me and many others. When Tony was first diagnosed, I wanted to do something to show him my support.  At the time, I had just gotten involved in endurance sports, participating in a few small triathlons and running events.  I decided that I would raise money during the summer of 2006 for colon cancer research in Tony’s honor.  That summer, I participated in the Philadelphia Insurance Triathlon and the Nation’s Triathlon in Washington DC, and raised over $15,000 for colon cancer research in the process.  Tony’s good friend, and Get Your Rear in Gear – Alexandria event director, Jay McConville joined me in racing at the Nation’s Triathlon.

While I was thrilled with the amount of money I was able to raise, I thought there might be a better, more sustainable way to help fund colon cancer programs serving local communities.   I became involved with co-chairing Get Your Rear in Gear – Philadelphia in 2009.  My hope was that Tony would be joining us to run or walk in the inaugural Philadelphia event – but instead, we ended up naming the Kid’s Fun run in his memory.  Colon cancer had claimed another member of my family.

Tony was a man who loved his family, as our own mother loved us.  His wife and three children were his world, and his loss looms large for them.  Having lost my own mother at a young age, I understand the impact of losing a parent more than most.  Supporting families who are caring for or have lost loved ones to this disease has become a strong interest of mine. I am looking forward to continuing to work with Get Your Rear in Gear to honor the memories of Tony and my mother Betty Jo in a way I think would make them both happy – by taking care of other families and caregivers that are so strongly affected when their loved ones are diagnosed with this disease. 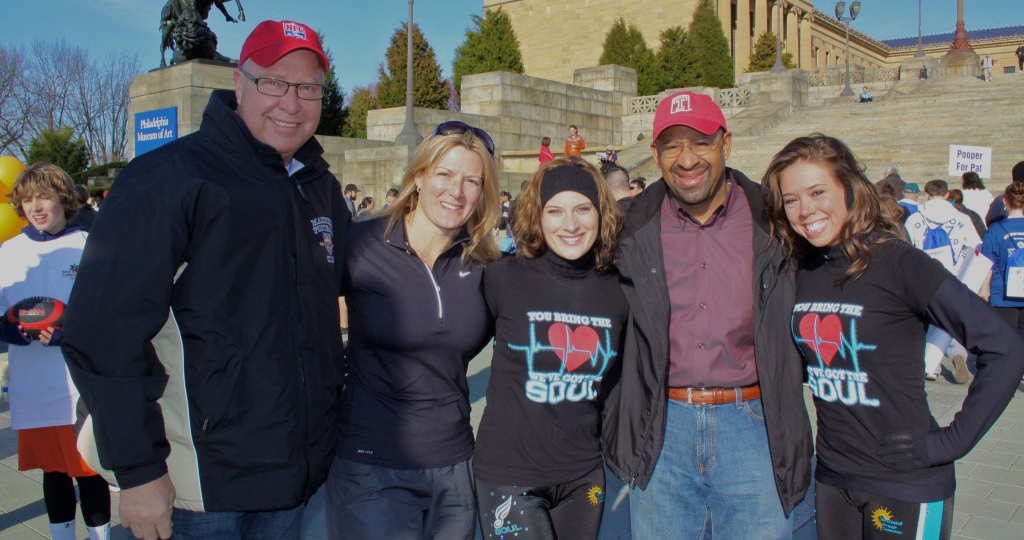