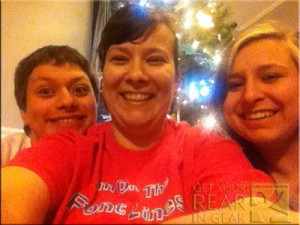 My name is Angela. I’m 38 and I was diagnosed with Stage 3 rectal cancer in April of 2011. You talk about angry and confused. I was so mad. I have 2 children and they need me. I had a boyfriend who my life was getting started with and going pretty well. My career was just taking off and so now this? Come on!

Needless to say, things didn’t get any better. My life quickly became a whirlwind of activity. Doctor appointments? I would go to one and they would say, “Okay, we have 3 more lined up so lets go get started.”

It was crazy. I got started on round one of 28 rounds of chemo and radiation. At first I thought, I can handle this, this is nothing. The chemo made me sick the first week or so; 5FU was it, in the wonderful fanny pack it went with me. It was my shadow day and night and I had it 5 and a half days a week. Then not to mention the radiation. I burned, I was in pain. My butt started looking like hamburger meat and it became so painful to go to the bathroom, I would pray to not go. I slept all the time. I would wake up just in time to go to radiation, come home, shower and go back to bed. It zapped me good. I was kidding myself when I thought I could handle this.

The doctors informed me this was a year-long thing. I thought they were lying to me and it wouldn’t take that long. Well, here we are in February and I’m still not done.

Next came surgery. August 2nd brought me to having a “footish” (per the doctor) of my intestine taken out. It had a golf ball size tumor in it. I had a radical hysterectomy since this type of cancer tends to spread to the lower areas. My appendix was taken out for good measure and I had a ileostomy put in. It was awful. They put it in a bad place and I was never able to get it under control. It leaked all the time and my skin quickly burned. I started taking so much anti-diarrhea meds that I had to pay for it out of pocket to get it to thicken. My insurance wouldn’t pay for it, so I had to keep getting refills.

Finally in October the surgeon called and wanted to know if I was interested in having it taken out. I said, “Are you kidding me? Of course!” So a test was done to see if I was all healed and well, I was. I was scheduled for surgery and it was gone! Praise the Lord!! Within one week, it was infected. The pain was so intense, I don’t think I’ve ever had that kind of pain. Not even having children. The staples were removed and it was packed twice daily until it was healed 2 months later. I’ve got one nice scar from that! I love it!!

Now, I’m on my final round of chemo! I have 4 more rounds to go and I’m done. My oncologist says I’m in remission. Those words still haven’t wrapped around my brain. The light at the end of the tunnel? Maybe so… I pray it is!! I’m ready to live again!!