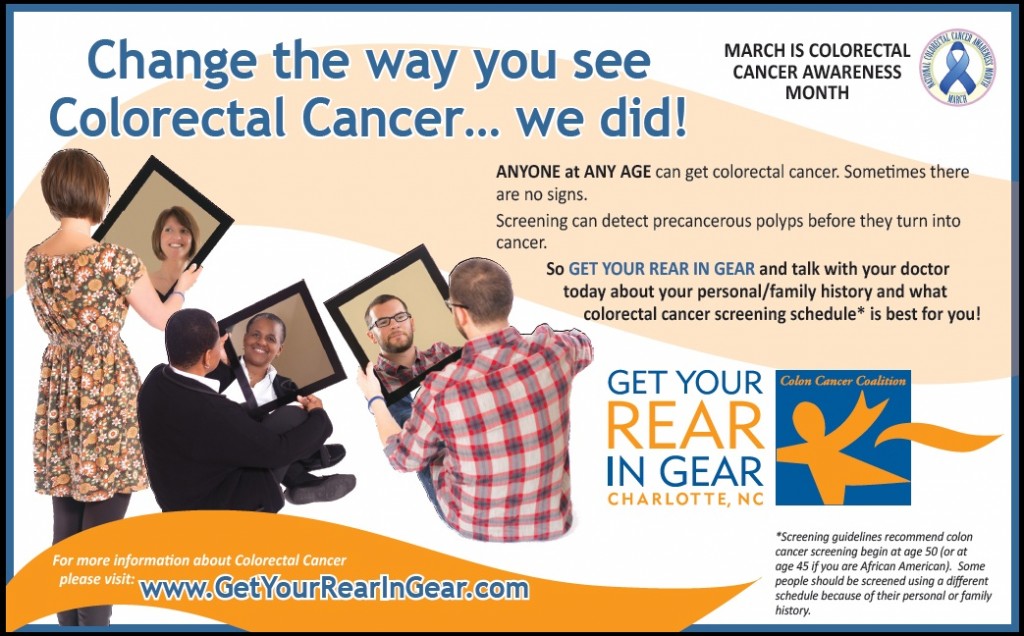 In their continuing mission to spread the word about the importance of screening for colorectal cancers, the Charlotte Get Your Rear in Gear event directors chose to direct some of the proceeds from the 2011 race to a public awareness program in March of 2012. Mary-Karen Bierman and Sue Falco placed an advertisement in Charlotte, NC-area weekly newspapers, designed to raise awareness of colorectal cancer and serve as a reminder to the community to schedule their colonoscopy if they are over the age of 50. The ad also encourages members of the community to discuss symptoms with their doctors if they have concerns or a family history of colorectal cancer. The ads were ran the first week in March (Colorectal Cancer Awareness Month).  The campaign reached nearly 200,000 people in the Queen City with a message encouraging people to “Change the Way You See Colorectal Cancer.” Charlotte Get Your Rear in Gear Co-Directors, Sue Falco (L) and Mary-Karen Bierman (R) at the 2012 Charlotte GYRIG.

“From the beginning of Get Your Rear in Gear to Charlotte, we knew we wanted to educate people that colon cancer doesn’t just affect people age 50+,” stated Mary-Karen Bierman, Charlotte co-director. “Sue and I are living proof of that. Earlier on we came up with the slogan ‘Change the Way You See Colorectal Cancer’ and that is what we wanted to do with this awareness campaign.” “I remember standing in front of the mirror after my diagnosis and changing the way I saw myself,” continued Bierman. “At 39 years old, the picture I had of myself changed because of colon cancer.” The pair wants to let everyone know that colon cancer affects everyone, young, old, all races. In the future, look for them to find ways to continue the awareness throughout the year. “We want to empower people to be their own best advocate and educate those under 50 to understand their body and be proactive with their doctors and GIs. Not to accept the ‘you’re too young for cancer’ brush off and be advocates for their own health,” said Sue Falco, Charlotte co-director. “We didn’t accept that and that is why we are still here to continue the fight.”