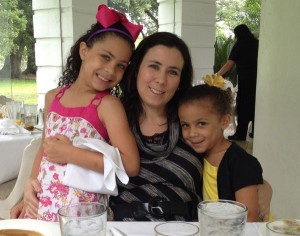 I am a 33-year-old wife and a mom of two little girls who were three and six when I was diagnosed with colon cancer. My husband was in school working on his masters’ degree out of town, so getting the diagnosis and undergoing treatment did not come at a convenient time in my life. We live in Baton Rouge, LA.

I am also an artist and teacher.  As I worked towards finishing up the school year in May 2011 and finishing a body of paintings for a show, I began to have strong stomach cramps. After about six to eight days of not having a bowel movement, I began to be concerned. I was not feeling well, but that was very common for me. I was always tired, but always attributed that to stress, work, and having young children to take care of. So I went to my doctor who assumed I was suffering from constipation. I followed the doctors’ orders to relieve the constipation, but it did not work. The laxatives prescribed induced severe stomach cramps. I was turned away from the ER twice, before I was admitted to the hospital.

I could no longer hold anything down and was having severe labor-like abdominal contractions.  After four more days of these cramps and nothing showing up on CT scans my abdomen was swollen to the size that it was when I was seven months pregnant. I prayed and cried and sang songs over myself in desperation for God to intervene. After four days in the hospital, a barium enema x-ray was conducted. This was the most painful thing I could have ever imagined, but I was so desperate for an answer. A tumor was found in my lower sigmoid colon, which was completely blocking any bowel passage. By this time I was very toxic and a team of doctors was put together at midnight to perform surgery.

I was very blessed to have some family and friends and even a doctor who let me know that he had his faith in God throughout this operation. I was told at this point that I probably had cancer, but I was getting drugged up for surgery very quickly. By the undeserved grace of God, I woke up at 6:00 am in the ICU in pretty rough condition and something I had never imagined, a colostomy.

My husband  was  told that my life had been saved in surgery and I was later told by an anesthesiologist that I was very lucky to make it through the surgery. While in the ICU, I turned to my faith and although I couldn’t keep my eyes open long, I turned to an unfamiliar passage of scripture, Psalm 103. It encouraged me to believe that I was going to be okay.

After another battle of trying to get my digestive system to work again, I was finally able to digest food. I had a huge adjustment to make with learning to live with a colostomy. However, I have never felt so loved by my husband and those who accepted “the new me”. My only wish is that I had known the symptoms that had been present for at least 10 years.  Although all of the cancer I had was removed in the surgery, it was stage IIIb, so I received twelve rounds of the Folfox combination of chemotherapy drugs over a six month period.

The main physical challenges I faced after treatment was undergoing another major abdominal surgery to have my colostomy reversed and dealing with severe neuropathy. Neuropathy has made it challenging to function as a normal person, while feeling like I was trapped in a pain bubble, but it has gradually improved to the point that I can be active again. Now I am determined to do what I can to take care of my body. I look forward to running in the Baton Rouge “Get Your Rear in Gear” 5K.

Colon cancer surgery and treatment definitely put a strain on me and my family as I struggled to continue to take care of myself, my children, and support my husband in his studies, while usually feeling like there was nothing left in me. However, God provided me with the help I needed in the most unexpected ways and through the most unexpected people. I have forged stronger friendships and broken relationships have been mended. Because I have been humbled and learned to trust in God on this level, cancer has changed me into a much better and more compassionate person. It has been a true blessing in disguise.