By Lindsey ZimmermannMarch 1, 2014Faces of Blue 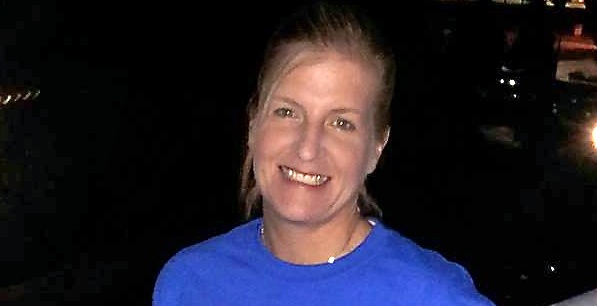 My name is Shanie Hepler and I am an AVP of Operations at Farmers Bank of KC. I have been in banking since 1989. More importantly, I am a mother of three beautiful children. I have a daughter named Tiffanie who is 21, a son named Alexander who is 19 and a daughter named Karah who is six. I am also a grandmother to a three-year-old boy named Brayden. The last member of my family is Scott, who chose to marry me even though I was fighting cancer.

At the end of 2006 and beginning of 2007, when I was proudly expecting my third child, I was diagnosed with stage IV colon cancer. I was 38 years old. Towards the end of this pregnancy, I was suffering from terrible bowel trouble. I brought this up to my doctor at that time and was told I had hemorrhoids due to the pregnancy. It eventually got so bad that I couldn’t even take a walk after dinner and make it back to the bathroom. I also started passing nothing but blood. I gave birth to my healthy baby girl on May 9th, 2007. I continued to suffer the same symptoms and was told that I needed to give my body time to heal. When I returned to work, I could not function on my job with all of the trips I had to make to the bathroom. So I sought help on my own and went to see a gastroenterologist. On August 24th, 2007 I had my first colonoscopy where I was given my images upon waking up and told that I had stage IV colon cancer. In a daze I scheduled a CT scan. It showed that I had spots on my liver. I was immediately referred to an oncologist.

After the initial reaction to a diagnosis of Stage 4 cancer, my life became incredibly blessed.  I was surrounded in so much love and support.  I had no idea a person could be loved that much. My faith became stronger than it ever was before. I started viewing life, every second of every day, as a precious gift. I don’t think you can truly be that grateful until you face the thought process of dying.  I am not saying my journey has been easy or a bed of roses.  I am saying that God surrounded me and showed me how beautiful life really is. I am sure my family and friends have suffered more than they would ever show or say, but their love and support for me has never waivered.

My daughter was baptized that next Sunday after my diagnosis and I started the prep for my colon resection surgery. They put my port in at the same time I had my surgery. After surgery, I was introduced to my chemo pump. The chemotherapy made me sick but regardless of how I felt, I got up every morning, got the kids off to school, my new baby to daycare and I went to work. In November I had liver surgery to remove the right lobe of my liver. The surgeon was able to remove all of the spots on my liver. For the longest time I internalized having cancer. I never talked about it and no one really knew I was sick because I didn’t “look” sick.  My boss gave me a voice when she formed Team Shanie at the Get Your Rear in Gear – Kansas City race in 2013.  Our team won first place in donations totaling $7,005.00. The love and out pouring of funds in my name, for my cause, is more than I can put words to.

Today I have inoperable tumors in my lungs. Although I wont survive my diagnosis, I live to be a voice for others to spread awareness and save lives through my story. My advice to you is this: surround yourself with positive, faithful people who can build you up when you can’t do it yourself. Let people help you instead of feeling hopeless no matter how small the task. Surround yourself with other survivors so you can freely talk about your fears.  It is ok to have down days. Be a voice and tell your story so you can help save lives of others through spreading awareness.