By Lindsey ZimmermannMarch 9, 2014Faces of Blue

Several years ago, I started having small amounts of blood in my stool. “Nothing to worry about,” is what I was told by my doctors. I was young, healthy and had two large babies, now 7 and 9 years old, so they said it was probably just hemorrhoids. Later on, I started having pain in my abdomen after I ate. “It is probably IBS, which can be triggered by stress. You have a lot on your plate right now and you are young and healthy,” is what I was told. My symptoms persisted and a third doctor said I that I was probably lactose intolerant and was informed of the different foods that I should avoid.

By this point I was starting to pass larger amounts of blood and had some pretty intense pain after eating, so I went to a naturopath and nutritionist to try to get some help. Finally, my aunt told me about a doctor that she went to. I went to see her for a check up and she said that if I was loosing as much blood as I said, then I should be severely anemic. She made me feel like I was exaggerating but did refer me to a gastroenterologist. During my consult with the gastroenterologist, he told me that he didn’t think I had cancer or anything serious like that because I was too young and I just didn’t have the risk factors. I had a second cousin and uncle who died of colon cancer.

On December 20th, 2012, I was working full time as a dental assistant and I had just finished my third quarter of anatomy and physiology. I had one class left to complete before I entered a registered nursing program at a local college. Unfortunately my dreams were put on hold when I finally underwent my colonoscopy at the gastroenterologist. When I woke up, the mood was very somber. I was told to get dressed and I meet in the consult room. It was there that the doctor told me that I had cancer, and his guess was that it had been there for about 5 years. When I heard that, it stopped me in my tracks.

Following my diagnosis, I had CT scans and consults. I had surgery to remove 12 inches of my sigmoid colon on January 16th, 2013, and my port placed on February 6th. I started 6 months of FOLFOX chemo five days after that. 6 out of 40 lymph nodes were positive for cancer, but as far as they could tell, my cancer had not spread to my liver. I was diagnosed at stage IIIC. I had my first CT a few cycles into chemo and was told by my oncologist that I had some suspicious spots on my lungs that we would follow.

At the end of June 2013, my husband and I were given the opportunity to travel to Chicago for a consult with the Cancer Treatment Centers of America. It was a wonderful trip for my husband and I, but I did not feel like I got any more answers from them than I got from my doctors here in Portland, Oregon. I was told that the spots on my lungs were most likely not cancer. They recommended an additional 6 months of chemo to make sure… I got another opinion when I got home and went with the majority 2/3 oncologists that said no more chemo was recommended.

I finished chemo on July 18th, 2013 and cried because I thought that was the end of the hard part of my journey. Wrong. Chemo turned out to be harder to bounce back from than I thought it would be. I was tired, weak, had “chemo brain” and the worst side effect still lingered: severe neuropathy in my hands and feet. At first I tripped over things that didn’t exist and I had a hard time with my balance. I have grown accustomed to not feeling my feet, but my hands are a different story. I work with my hands. It’s not an easy task and is very frustrating at times, but it’s something I have learned to live with. I will not give cancer a single victory over my body. On December 19th, a routine check up found that one of the spots on my lungs had started to grow. A PET scan confirmed cancer and I was referred to a cardio-thoracic surgeon. On January 15th, I had surgery to remove part of the upper left lobe of my lung, landing me in the hospital for 6 days. It has been three weeks since surgery and I am slowly returning to life. I am happy. I love and am loved. I am thankful. I am blessed. I am hopeful that this is the last of my cancer hurdles.

My advice to you is to stay hopeful; don’t give up. I know it is hard when you’re healthy mentally and not physically, but it’s SO important to try. One thing I teach my kids is to not just talk about the bad things that cancer has done to us, but to talk about the good, too! I ask my 9-year-old son what good has come from cancer and he told me that I am home more now and he likes that gets to play more video games when I get chemo. My 7-year-old daughter told me that she likes when people bring us desserts and she likes that I am home to snuggle with her and do her hair in the morning. By teaching my kids to see the positive in every situation, even the bad ones, I am hopefully teaching them to learn a lesson from every experience they have.

To me, Get Your Rear in Gear means to take control of your own health. It also means to bring awareness to this disease. I know that I will be a strong advocate and a voice for awareness! 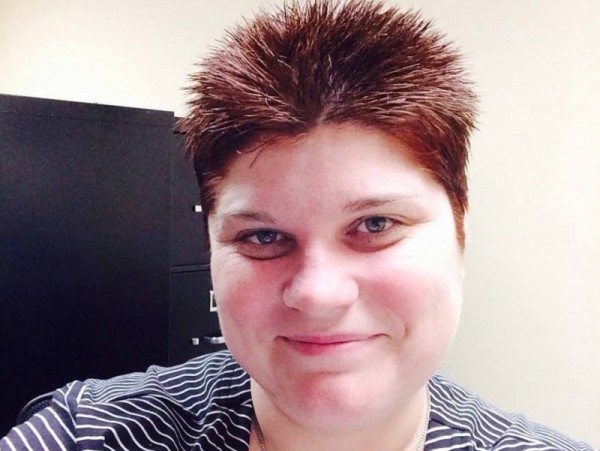