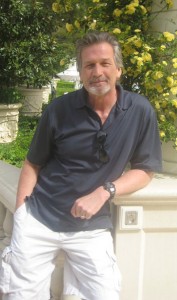 Brian was a renaissance man; by that I mean that he was very talented and knowledgeable in many areas. He lived for his family and was a wonderful husband, father and friend. He taught us many valuable lessons about life, love, courage and character.

Brian was a Systems Analyst with Lockheed Martin Corporation. He was an avid boater and fisherman. He especially loved to be out on the Chesapeake Bay. He liked music, movies, cooking, single malt scotches and cigars, travel, working on his home, and entertaining friends and family. He could be irreverent and loved to laugh.

Brian was screened early. He had gone for his first colonoscopy before he was 50, having had some minor stomach complaints. He had a polyp removed, was given a clean bill of health, and told not to return for five years. At 52, not even a full three years later, he presented with a ruptured colon and over 14 inoperable METs to his liver. He had no family history of colon cancer, and no major symptoms until he was diagnosed. Every doctor we met after his diagnosis assumed that Brian had ignored his symptoms and/or not been screened. We have been told over and over that Brian’s cancer was most likely missed. In retrospect, Brian felt some of his stomach issues, and other symptoms (he was never really sick) were a result of the cancer growing, and wished he had gotten a second opinion at that early stage. His message would be that you must be your own health advocate, even if you really like and trust your doctor. If something doesn’t feel right, get a second opinion, third opinion, and don’t stop until you get the answers you need. Your life could depend upon it.

Brian knew how to “fix” just about anything. He was extremely intelligent in many areas, and loved to learn new things. Brian was a good neighbor, and was always willing to help.

He was my husband, and my very best friend. He gave me two beautiful daughters, and he taught me, and them, many lessons about life, love, humility and family. He had a great sense of humor, and was a wonderful provider for his family. We will miss him forever.

Brian told us ” … when you get a cancer diagnosis you can start living or dying – I’m going to live, no matter what the final outcome.” He also never asked “why me”, but instead felt “why not me; if not me then who”. His attitude was “It is what it is”, and he wanted to do everything to keep his daughters’ lives as normal as possible during his illness. He was always very brave, always kept it lighthearted, and fought with everything he had to beat this awful disease,