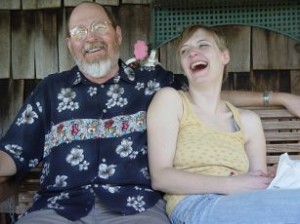 Dad was diagnosed in May of 2004 at age 50. He had had pain for about a year, but was afraid of doctors, in spite of our constant insisting that he get it looked at. Once he did, they found a golf ball sized tumor that required immediate chemo, radiation and a colostomy.

Dad was a champ, and the funniest man I know. He would put post-it notes with poems and notes on his butt for his nurses when it was time for radiation–his favorite read “does this post-it make my butt look big?” When it was time for his surgery, he and my mom had a “Kiss Your Ass Goodbye” party and he got a lot of use out of the phrase “Papa’s got a brand new bag.” His amazing attitude and humor, kept him going throughout his disease. 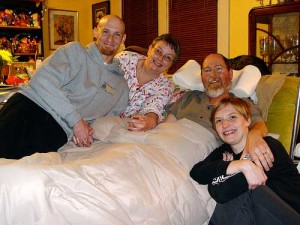 Sadly, the cancer continued to grow and spread throughout his liver and lungs and finally his spine. We kept him for longer than his diagnoses–he made it three and a half years! Sadly, on December 2007, he peacefully and beautifully passed away. I saw on his face his seeing Heaven, and he smiled as he took his last breath. He was 53.

I carry my Dad with me everywhere I go in my heart. He helps me to live my life–my new philosophy is to do the things I want to do now and see the world before it is too late. I remember being in Oregon on the phone with him (he lived in Mississippi) and telling him about how beautiful it was there. He told me that he was so happy that I was getting to see something that he never would be able to see. I will never forget that. I know he would be proud of me and the things that I am doing and how I choose to live my life. 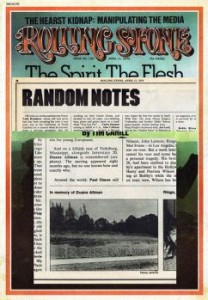 One more neat story that I’ll share with you–when dad was 19, he and three friends carved “Remember Duane Allman” into a dirt bank on the side of a highway in MS after Duane Allman was killed. It was there for years and even featured in Rolling Stone Magazine and many of their book compilations. 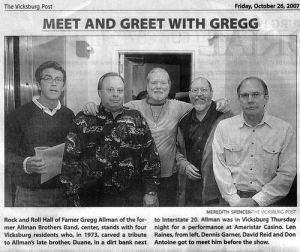 In October 2007, Gregg Allman was going to perform in my hometown, so the newspaper ran an article about them and interviewed Gregg, who told them that his mother had the photo framed in her house because it meant so much to her that someone made a tribute to her son.

The guys all got to go to the concert and meet Gregg where they presented him with a signed and framed photo of the carving. This was just a little over a month before Dad died. Isn’t that amazing? It was like God and the world was letting Dad have that moment before it was time for him to go. I am so proud of him. 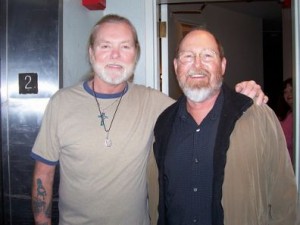