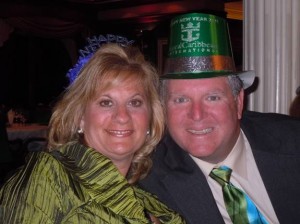 I am the wife of retired Nascar driver Randy LaJoie and now co-owner of a manufacturing business called The Joie of Seating, we make Custom Fitted Aluminum Racing Seats.

I had a sister who died of a brain tumor in 1979, she was 18. I also had an Aunt who died from Breast Cancer who was diagnosed when she was 48. When I noticed blood in my stool on the tissue I had a colonoscopy done and discovered cancerous tumor and polyps. I received six weeks of a chemo 5FU in a 24/7 pump and at the same time six weeks of radiation. Then I had surgery to remove tumor, then six more months of chemo 5fu and Oxapilaton. Now that I think about it I would say I had a lack of information about how I could help my body by taking supplements to help with side effects from chemo,

Cancer has made me grow in my faith. I feel that to me it was a gift that was given to me by the Lord. It has taught me to only trust in the Lord, because my cancer was completely out of my hands. I had so much support from my church and friends with meals and other such things. I found Going to church and bible study really helped me cope with having cancer. Also having another friend who was going through breast cancer treatments at the same time. It helped to talk to her about things because we felt like we were not alone. To others I would say do not ignore symptoms like blood when you go to the bathroom. It is a sign that there is something wrong. Go to a doctor and have it checked.

Now I am more careful with the things I eat, Try to eat organic and limit the amount of meat that I eat now, stay healthy by exercising. I am challenged still with lasting neuropathy in my hands and feet.

I feel very blessed to be cancer free right now. Stage III was very serious, I feel that I still have work to do in this world and the Lord was not ready for me yet.