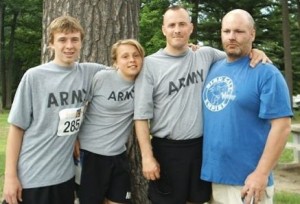 Paul with the Brunelle Family in Colchester, VT.

Paul was diagnosed with Stage IV Colon Cancer. He lived 2 yrs and 10 months with the disease and lost his life on March 12,2009 at age 42. He received treatment at FAHC-Burlington, VT.

Paul loved anything to do with automotives. Paul owned his own towing business and even built and drove his own race car. Paul’s passion was building models. Paul’s collection of models will live on with his son Jerrett. Paul had even met a dear young lad on the internet with their interest in model building. Paul had continued working and talking about his passion almost to the last day of his life. But most of all Paul treasured his wife, son, family and all his friends who meant the world to him. Paul’s life here gave all of us Jerrett and we are very thankful for that. The love and support Paul always showed his family and even his dearest friends will be remembered always. Not a day goes by that we all do not think of Paul until we all meet again.

My husband was deployed overseas with the Army National Guard in 2004 and that was the most devasting ordeal that my kids and I had to go through. Paul was always there for us and always called to check in on us and spent as much time as he could with us. He kept our spirits high and always made us laugh. We know Paul will be there as Todd’s guardian angel and watch over him come this next deployment in January 2010. It will be hard for my kids & I without his support.

Last year was the first year Get Your Rear in Gear happened in Colchester, VT. Todd & our two kids ran this 5k event and Paul was there at the finish line supporting them. I remember Paul saying, “It is not the person who dies that will be suffering, it is the people that are left behind with the pain”. This year we are going to form a team. “Team Pauly” and all his family & friends will be attending in remembrance of this great husband, father, son, brother, uncle, & friend.