By Rosalyn ZirngibleMarch 23, 2015Faces of Blue 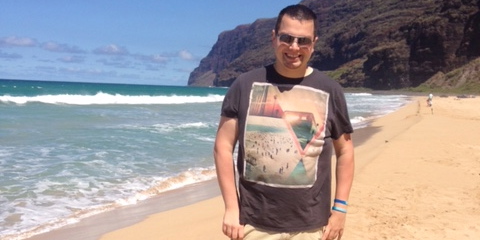 March 6, 2013, I was diagnosed with rectal cancer. At only 29 years young, I would have to endure the toughest road of my life thus far. Radiation and chemotherapy started April 1st and would last nearly 6 weeks. Around April 16, I found out I would have to have a colostomy bag for the rest of my life. At first I didn’t want to have the surgery and debated for weeks if I should. I was not ready for this adjustment. Or was I?

Fast forward to July 22. Surgery date! After about an 8-hour surgery I woke up with some sort of hope. I was alive and made it through. I spent just 5 days at OHSU in Portland, Oregon. I knew once going home I would face unforeseen challenges. I must say that I was very scared of the road ahead of me. I knew I had to adjust to a new lifestyle and I wanted to do it as fast as possible. My parents took care of me for about a week. They helped with bag changes and we learned together. After a month I met with an ostomy nurse who got me the right products and I have had little issues since. Also after three weeks I had returned to work. I wanted to get back to my normal life. I knew it wouldn’t be normal for long, as I had to start more chemo the week after. The middle of September I got the “Okay” from my doctor to take a 3-week work trip to Hawaii. I would visit four islands, which were Maui, Hawaii, Kauai, and Oahu. This was a big step for me. I had to get over my fear of flying with an ostomy. The only way to get over fear is to just do it! I was sure to triple check that I brought enough ostomy supplies for double the time I was going to be there. Just three months after surgery I was able to hike Koko Head. Koko Head is a very steep hike just outside of Honolulu. This is something I didn’t even feel I could do before surgery. It took about an hour and a half. After stopping numerous times, I kept telling myself “You can do it!” I felt so accomplished once I got to the top. The trip down wasn’t as difficult but was still a challenge. The following weekend after I got back from Hawaii I participated in the “Get Your Rear in Gear” 5k. My team had 17 people on it! I didn’t run because I had chemo four days earlier, but nothing was going to stop me from crossing the finish line. Not a colostomy bag, not chemotherapy, and definitely not cancer.

The day I found out I had to have a colostomy bag for life was one of the worst days of my life. I didn’t think I would live a normal life anymore. As you can tell I have not let this determine what I can and can’t do. I chose not to let this ruin my life. However, I am still very self-conscious with my colostomy. I do have few issues with it, but I never let it ruin my whole day though. I chose to turn a negative into a positive. I remain more positive and happier than I have ever been in my life. People don’t lie when they say you can do anything with a colostomy. Are there going to be challenges? Yes. But a challenge only makes your stronger.

Editor’s Note: Dan is the Local Event Director for Get Your Rear in Gear – Portland (August 8, 2015).