By Rosalyn ZirngibleMarch 31, 2015Faces of Blue 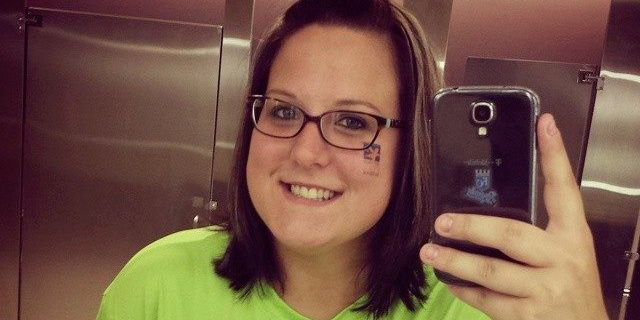 Written By: Stacie Moody, in memory of her father. Stacie and her father.

I was 4 years old when my father lost his battle with colon cancer. He was diagnosed at 37 and passed away a month after his 40th birthday. A tumor in his colon had ruptured, sending him to the hospital where he found out he had colon cancer, and that it had spread to his liver. His mother, father, sister, and several other family members had colon cancer, among other cancers, but lost their battles as well.

Since I was only 4 when he passed, I don’t have many memories of him; in fact, I have only two. When I was kid, I had a very tender head, so I didn’t like when people would brush my hair. That is, except for my dad. He was the only person that could brush my hair and it wouldn’t hurt. My other, less warm, memory is the view from his hospital room. Right outside of his window was the hospital’s helicopter that I would watch land and take off. The rest of my memories of him are very foggy; I can’t differentiate between what is real and what may be a dream. I inherited a lot of things from my father- his genetically weak and crooked teeth (thank god for braces), his stubby fingers, an incredibly sarcastic attitude, and his love for the St. Louis Cardinals. I have embraced all of that, I feel honored that I carry on some of his characteristics. But one thing that has always scared me and I have been worried that I may have inherited from him is colon cancer. I have always had stomach and bowel problems, since the day I was born. When I was 19 I started having more severe stomach issues, but my doctors didn’t think anything of it, so it was two years later when I turned 21 when they did any testing. The only thing they would approve and insurance would pay for was an upper GI, and all they found was a hiatal hernia. This is where my battle with doctors and insurance began.

Once I turned 21 I decided it was time to get serious about colon cancer prevention. I talked to several doctors, for several years, to no avail. I was told I had IBS, I didn’t have IBS, I MIGHT have IBS (to this day I’ve never been tested, nor treated for IBS), I “probably” have celiac disease, I needed more fiber in my diet, I needed less fiber in my diet, maybe more iron would help, and so on… This went on for five years. I finally found a doctor that would listen… last year. He recommended I see an oncologist at the University of Kansas Medical Center. I met and spoke with Dr. Guier and everything started to come together.

Dr. Guier talked to me about Lynch Syndrome and the testing that was involved. Everything was ready to go, and then we started talking about insurance. The insurance I had at the time, of course, wouldn’t pay for the test unless I went to a genetics counselor, which they didn’t pay for. About a month later I got new insurance and had the test done. The test came back negative, and I didn’t have Lynch Syndrome! Stacie with her father.

Ok, so I don’t have Lynch Syndrome, but that doesn’t mean I’m still not at risk for colon cancer. My stomach problems were still persistent and I was just getting older. Something needed to change- I needed a colonoscopy! This month I got into a gastroenterologist to discuss my stomach problems, and only five minutes into the visit, after talking about my health issues and family history, she asked me when my last colonoscopy was. The look on her face was a mix of shock, confusion, and anger when I told her I had never had one. It was at that moment she said the 8 words I had been waiting almost six years to hear: “we’re going to schedule you for a colposcopy!” I was so excited when I went into the scheduling office! The lovely lady was surprised, to say the least, when I came in and never stopped smiling. She went through the prep instructions, what the procedure consisted of, and all of the other information I needed to know for my first colonoscopy. What also made this even more special and exciting is that I was getting my first colonoscopy during Colon Cancer Awareness Month!

Like I said, I’ve been dealing with stomach issues since the day I was born, so the prep wasn’t too bad for me. I was instructed to prep with over the counter laxatives, Miralax and Magnesium Citrate mixed with Powerade. For me, since my system is somewhat abnormal anyway, the mixtures didn’t take effect until after 10pm that night- I started at 4pm. I was up all night, then up at 6am to do my day-of prep. Needless to say, I was looking forward to the anesthesia and nap.

I had my procedure done at St. Luke’s in Lee’s Summit, and it was such a great experience! Everyone I dealt with was so nice and friendly. They really made me feel comfortable and I got the sense they were genuinely happy with my proactive attitude. From the woman at registration to the nurse that gave me the IV, who was exceptionally nice and didn’t make fun of me when I started sweating just thinking about the needle. The whole procedure took about 30 minutes, and I woke up talking about Get Your Rear in Gear… no joke. After I really woke up and was cognitive, the doctor came in to talk to me about the results.

Honestly, it wasn’t until that moment that I even considered getting bad news. I was so focused on accomplishing one of the most important goals in my life, I never thought about the possibility of actually having a polyp, that being said it got real, real quick. With every negative thought racing through my head, the words “you’re fine, nothing was found” somehow made it through the thick, black cloud that consumed my brain. The test came out clean, I didn’t have any polyps, and I am due another colonoscopy in five years. I took that moment to really reflect on just how lucky I am.

I finally had a colonoscopy. I cannot explain how I good I feel about this experience. I can finally join the I Got Screened Club! After years of wondering what was going on inside, years of hoping I was safe and healthy, years of frustration, anger, and worry, all wiped away in one afternoon. There is no better feeling than that.

Working with Get Your Rear in Gear, becoming an event director for Kansas City, getting to know the amazing people involved in this great organization, and building relationships with Ginny and Kari here in KC has been one of the absolute best things to ever happen to me! Spreading colon cancer awareness is so incredibly important to me!

If those reading this take just one thing away from it, please, GET SCREENED! When speaking to people about just how important regular screening is, the biggest complaint I get is about the prep. I get it, it’s not the best way to spend a Sunday, but I cannot imagine going through a moment of cancer treatment. I know there are many other ways preps are done, and I believe I may have gotten the easiest one. I’ve heard horror stories and I must admit the preps are not a walk in the park. But to me, it’s all worth it! I’d much rather spend my day in the bathroom once every five years than the alternative.

So that’s it. That’s my story. I love my family, I love my friends, and I miss my father every day. I wasn’t able to do anything about his and his family’s prevention, but I can honor all of them by spreading awareness and the great importance of screening and knowledge to others, so maybe their life stories can be changed. This is why I wear blue, for the cause, for the cure, for my friends, my family, the Moodys. I wear blue for my father!