By Rosalyn ZirngibleApril 7, 2015Faces of Blue 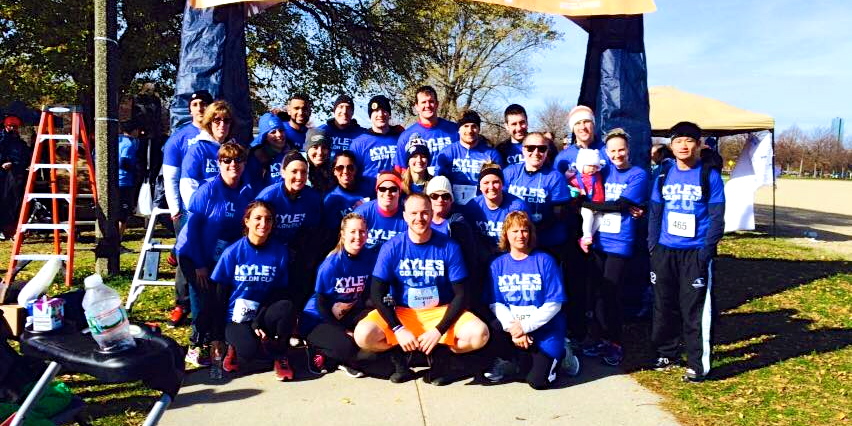 It was February 7, 2014 when I was diagnosed with Stage 3 Colon Cancer…I was 26 years old. Eight months before being diagnosed I was starting the academy to become a corrections officer with The Massachusetts Department of Correction. We had a pretty demanding schedule that included an hour or so of physical training a few times a week and I was in pretty good shape. After finishing the academy I started on an overnight shift. I began having problems going to the bathroom and just brushed it off due to the new shift and some of the stress that comes along with a new job, especially in my field. The day that Kyle proposed to Meghan.

After a few months of dealing with these issues, I finally made an appointment to go see my doctor. They did a rectal exam, took some blood work and sent me home with a stool sample test. The next day the doctor called and told me my blood count was low and suggested I take some iron pills to see if that helped. About a week went by and I was just starting a work out before heading into work for the night and I started to feel a sharp pain in my stomach. It took some convincing from my girlfriend, Meghan (now fiancé!) to head to the emergency room. When I got there they could tell I was in some serious pain and got me in to take a CT scan. It took a little while but they came back and said they saw some type of mass near my colon. They wanted to keep me overnight and have an MRI done the next morning for a better look. The MRI results came back that showed there was a mass in my sigmoid colon and I only had about a 3 mm passing. It was unclear at the time whether or not it was cancerous but they wanted to perform surgery right away. My sister-in-law is an ER Nurse at Brigham and Women’s hospital in Boston, MA. She was nice enough to come pick us up and bring us there. I was admitted and had a colonoscopy the following morning. My surgeon came in and told me he had seen the results, eventually telling me that I had a baseball-sized tumor and scheduled my surgery a few days later. They removed the tumor and also 49 lymph nodes, in which 4 came back positive of the cancer. The cancer had started to spread which called for chemotherapy and radiation (because of the tumor being so close to the rectum). My surgeon explained to me that “the surgery would be like a sprint, and the chemo and radiation would be more like a marathon.” I got my running shoes ready. I started a Chemotherapy regimen known as FOLFOX every other week for six months. Chemo was completely exhausting but I kept my head held high and told myself I would NEVER stop fighting this thing. I had a dual port, which made access for an IV hookup a breeze and would actually go home with a pump that ran for 48 hours. A few days after my final treatment I went and had my “mapping” done for my radiation treatment, which would plan out the exact spots marked by small little tattoos where I would receive the radiation. Along with the 5 1/2 weeks of radiation, I continued a pill form of chemotherapy, which was a lot easier than having an infusion. I seemed to handle the nausea a little better. Radiation made me feel pretty fatigued but it was over before I knew it.

A month after finishing my treatment I went in for a CT scan. It was on a Friday afternoon and I wasn’t meeting with my oncologist until the next Monday. Needless to say that weekend felt almost as long as the last 7 1/2 months but my results came back CLEAR. It was a great feeling knowing that I had beaten this thing. Another feel good moment was running in the Get Your Rear In Gear 5k in Boston that following weekend. Kyle’s Colon Clan 2.0 was a group of some of my family and friends who have been there for me every step of the way.

I would like to thank all of my family, friends, and co-workers who have been in my corner throughout this battle. They will never know how grateful I am to all of them and how much their support kept my spirits up. I had an incredible team of doctors at Brigham and Women’s Hospital and at Dana-Farber Cancer Institute who were always there for me with all the questions you’ll come across when dealing with something like cancer. It was a scary time but I knew I was in good hands. I would also like to thank the Colon Cancer Coalition for the great job of bringing awareness to this disease and the importance of getting screened.