By Caroline BurnsMarch 11, 2016Faces of Blue 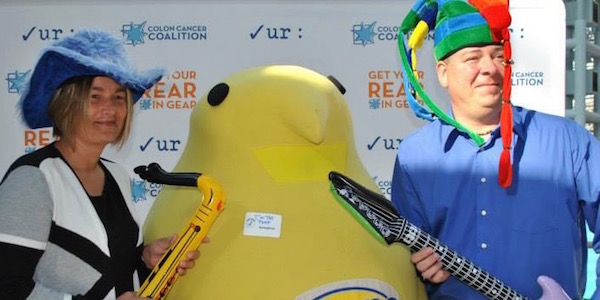 My story begins on the 9th day of a ten day Caribbean cruise in 2011. I was 41 years old with a lifetime of chronic constipation. It would not be unusual for me to go 1-2 weeks without having a bowel movement. On the 9th day of the cruise I was beginning to get uncomfortable so I located a laxative onboard to help relieve my discomfort. Once we returned home I had a couple episodes of diarrhea and then my symptoms progressed to abdominal pain. Finally my husband convinced me to go see my doctor. My primary doctor said my symptoms sounded like irritable bowel syndrome but referred me to a specialist. Next was an appointment with a Colorectal Surgeon who ordered a barium air enema (x-ray). Let me tell you….if I knew then what I know now I would have insisted on a colonoscopy instead, at least you get sedation! At my follow up appointment he told me that I had a “big problem”. As we both looked at the x-ray he told me that I have a malignant tumor and needed surgery. I was in shock and didn’t know what to say. I have had stable Multiple Sclerosis for 14 years otherwise I was a healthy 42-year-old. I was all alone when I received this news since we assumed it would show nothing. My husband called while we were scheduling these appointments and after hearing the news he immediately came to be with me.

The following week I had my laparoscopic assisted colon resection. I even convinced my surgeon to take my appendix since she was already in there. In surgery they removed a 5cm nearly obstructing tumor from my sigmoid colon. The pathology came back that I had stage III colon cancer. This was very surprising and I began to wonder how long this cancerous tumor had been growing silently inside of me? On the 4th day after my surgery I developed fevers and the pain became unbearable. A CT scan showed a large amount of free air in my abdomen so back to surgery I went. They found and repaired an anastomotic leak where they had reconnected the two ends of my colon during the previous surgery. Unfortunately, they also had to create a temporary ileostomy so the surgical repair would have time to heal. Even though I had been a nurse for 20 years, learning to manage my own ileostomy bag was more than I ever imagined. The progress through the remainder of my hospital stay was slow but I finally was able to leave the hospital after 18 days! The next week I spent most of my time watching TV alternating between the couch and the bed. I was so deconditioned that it was like running a marathon just to go up a flight of stairs. I tried to keep on top of my eating and drinking but soon found I was falling behind. It got to the point that when I stood my eyesight would black out and I would have to lie back down or I would pass out. Luckily my husband works for the fire department so he had a few of his fire buddies come over and carry me out to the truck using a blanket so we could make a trip to the ER. Secretly, I have to say that I did not mind those cute young guys in their firefighter gear carrying me to the car although it was quite embarrassing. A few liters of fluid and I was on my way back home feeling much better.

I spent the next month recuperating from my surgeries and regaining my strength. It was finally time to get my port placed and begin my 12 doses of chemotherapy. My family and friends drove me to all of my chemo appointments. We would sit for hours visiting while the chemo was infused and then I would go home with a fanny pack of chemo infusing over the next 2 days. My hair became so thin that I had to attempt a “comb over” just to cover my scalp. It was at this time I decided to just shave my head. I didn’t feel much like a woman but at least I wasn’t clogging the shower drain anymore. Many of the firefighters that my husband worked with also shaved their heads to show their support. I was probably at my lowest during this time as I adjusted to my new image of a 42-year-old bald woman with a poop bag hanging off her abdomen. I spent most of the next year wearing hats or wigs as I finished my chemo and my hair grew out. I will never forget my last day of chemo and how good it felt to finally be done so that I could try to return my life to a normal routine.

The following week after completing my chemotherapy I had a follow up CT scan. I was so excited when I received the news that everything looked good and there was no evidence of cancer. I immediately called everyone in my family to tell them the good news, I was cancer free. My Dad was not at home so I left a message on his voicemail that he could listen to when he got home from work. Just when I thought things could not get any better a police officer showed up at my door and my world was about to come crumbling down. They informed me that my father was killed in an accident in Wisconsin. My Dad was not married and I was an only child so now I had to plan a funeral and it had only been nine days since I completed my chemo. I was already exhausted from the previous nine months of tests, treatments and surgeries. How could God think that I could possibly handle any more? Much of it was a blur but with the help of my husband and mother we planned the funeral and laid him to rest with a beautiful service. I could not help but think that my Dad never made it home to hear the good news that I was cancer free! Next step was to get my ileostomy reversed and I was very anxious to get this done. Unfortunately I had to wait one month after completing chemo to schedule it. The only good thing about the ileostomy is that I did not have to complete any bowel prep prior to the surgery which often times is the worst part. The reversal surgery went well and much to my surprise, they do not suture the skin closed because they want it to heal from the inside out. Needless to say it looked like I had a large gunshot wound where my stoma used to be which required daily packing until it healed. Finally, all of the plumbing was now working as expected and I was again discharged home.

The final leg of my journey was to get my port removed and a final follow up colonoscopy which I completed 13 months after this all began. There were many ups and downs throughout my journey but I just tried to keep a positive attitude. I am now three years cancer free and could not have done it without all of the love and support of my family and friends. I have realized how important life is and you should live every day as if it is your last. We never know what the future holds and if we will get the chance to do those things we put off till tomorrow. 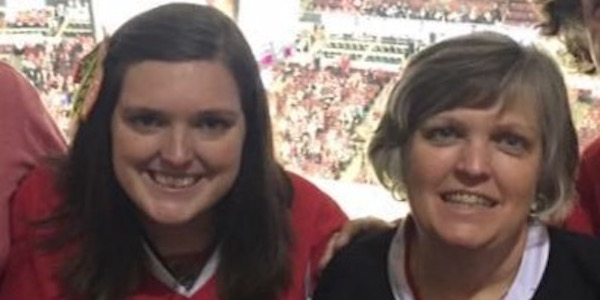