By Caroline BurnsMarch 24, 2016Faces of Blue 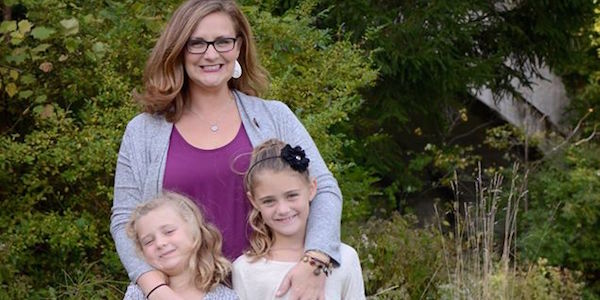 Fall of 2012. It’s official. That is definitely blood in my poo. I tried to believe it was something else for quite a while–2 or 4 months. I very much love and trust my General Practitioner so I called that day and made an appointment. She said, “I know this is going to sound extreme, but I’d rather be safe than sorry–let’s schedule a colonoscopy.” I was game for ruling out all the serious stuff, specifically cancer. I didn’t make a big deal of it since people in my family don’t really get cancer, so I asked my girlfriend Jill to take me to the appointment. Nov. 6: After a night of prep, I met Dr. Cheng and he explained the procedure, I explained my symptoms and he said we would probably just need to make some changes to my diet. 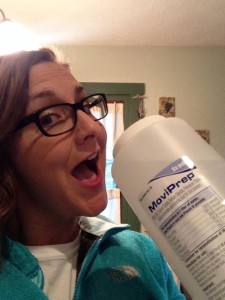 I will never forget waking up and seeing their faces. “Stacey, can you hear me? It’s Dr. Cheng.” I looked at him and his eyes were like saucers and Jill’s face was serious. He explained that they saw something they didn’t expect and were sending it for testing. The next thing I know, I’m home and Jill is talking to my husband telling him to come home from work, now. I don’t think it really sunk in that he thought it was cancer, but couldn’t say it, until quite a bit later. My husband and I spend two days as nervous wrecks, trying to be normal for our 3 and 5-year-old girls. We cried a lot and slept very little. Finally, on day two of waiting, we decided to leave the stupid house for some lunch and Dr. Cheng called on our way. We pulled the car over and he told us the biopsy was back and it was cancer. I screamed at him explaining that I’m 35, a mommy of two little girls and I can’t have cancer. He apologized and told me that a nurse navigator would soon be in touch for next steps. (To this day, I can’t believe I yelled like that.)

Within the hour, Karen called. Karen was my nurse navigator and little did I know, she would become my lifeline at the hospital. She very calmly explained everything to me, let me cry and answered 1,001 questions that I had. From that point forward she would tell me where to be when and I would go with my entourage of family and friends. Karen provided a game plan on how to get the colorectal cancer out–it’s exactly what I needed! After we determined the cancer was not in the muscle wall, we proceeded with surgery. I desperately wanted to go home to Wisconsin for Thanksgiving. My doctors agreed that one more week of waiting was fine, so on Nov. 28 I had surgery to remove the cancer, a foot 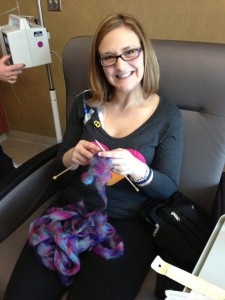 of my colon, 2/3 of my rectum and 30 lymph nodes. I was scared of surgery but ready to get the cancer out! We soon learned that 7/30 lymph nodes showed cancer so that meant chemo! I got my port and started my FOLFOX regime on Jan 2, 2013–not a great idea to do all at once, by the way (read: sick as a dog!), but a snowstorm prevented me from getting the port earlier. I sat for chemo on Tuesdays, took home my pouch and returned at noon on Thursdays to get it removed. After the first treatment I became neutropenic and it was very disheartening. But, I was then able to get a Neulasta shot which helped until the very end!

Beside my friends and family, my nurses and doctors were my cheerleaders—always there to make me more comfortable and let me know just how great I was doing. I really did (and still do) felt at home at the Cancer Center. I tolerated chemo pretty well and was able to work most days all the way through. At first, I think it was weird to have me there with my chemo pouch. I remember my CEO stopping by saying, “So, let me get this straight. You are getting chemo right now. At your desk?” Yep. We all got used to it and joked about bedazzling my pouch! I had the usual side effects of losing about a third of my hair and numbness in my hands and feet. One time at daycare, I was walking the girls in and they said, “Mommy, where is your shoe?” I looked behind me and I had walked out of it in the parking lot. I had no idea!! I finished chemo on June 11, 2013, which is also my husband and aunt’s birthday so it was a great day to ring the bell! 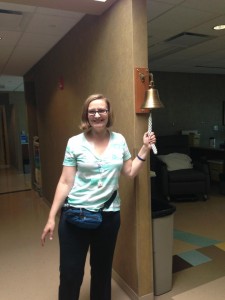 Though we hope for a one and done cancer story, mine doesn’t end there. As mentioned above, I agreed to genetic testing and learned that I have MAP which means I cannot, even for one year, let my guard down, as my polyps grow faster and turn into cancer faster than the average person. This is a recessive inherited trait which means that both of my parents were carriers and I just got the short straw on the bad genes. We will have my husband tested and as long as he is not a carrier, my kids’ risk should just be the same as the average person. None of my doctors in Indiana had ever met anyone who had tested positive for this mutation, so my mom and I took a trip down to MD Anderson to learn more! I had done lots of research and had tons of questions because I didn’t seem to present like the typical case. Instead of 10-20 polyps, I have about 5 removed each time. And, yes, they are always a few that are precancerous. There is still a lot to learn about MAP but the important thing is that I stay ahead of it with continuous monitoring. Do I wish I never had to think about cancer again? Yes, I suppose. But, I will tell you, I sure learned a lot in the past couple of years and if I can continue helping others who are going through cancer or even just help remind them to listen to their bodies and take their health seriously, then, it’s worth it.