By Caroline BurnsMarch 26, 2016Faces of Blue 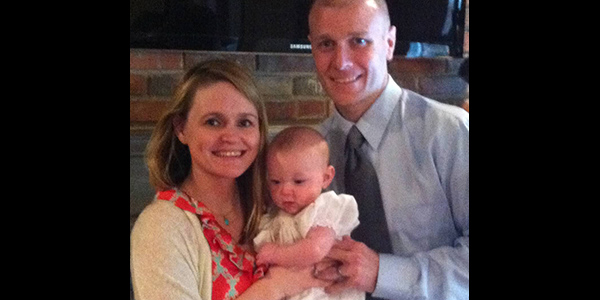 My world collapsed in every form and fashion on May 8, 2013.

Only a few days before, life was pretty great. My 31-year-old husband Chris Wickham and I had just found out we were expecting a baby and we had held on to that news ourselves, only telling a select few. We were happy and healthy and had so much to look forward to, or so we thought. After a brutal night of abdomen pain, Chris ended up in the ER. There are defining moments in life that change the course of the future. That moment for us was hearing that Chris was diagnosed with Stage IV colon cancer. There was a sizeable tumor blocking his colon and “several” that had spread to the liver. What followed was a blur of preparing for surgery, lining up doctors in Houston and Dallas, and riding the roller coaster of chemotherapy treatment; all while trying to prepare for a new baby.

Despite his diagnosis, Chris and I lived as normal of a life as possible. He went to work every day that it was possible and took care of our baby in any way he could manage. I wish I could say we defied the odds. It wasn’t from lack of trying; we did anything and everything we could. Chris was steadfastly hopeful and positive, but in the end it was an uphill battle that couldn’t be won. After dozens of doctor appointments, three surgeries, over 16 chemotherapy treatments, and an attempt at a clinical trial, Chris lost his battle on June 26, 2014. Chris was an amazing friend, father and husband. He loved football games at the University of Oklahoma, his boxer Bruiser, mountain biking, snow skiing, and spending time with his family and friends. The impact he had on others was so apparent at his funeral and on the days following, where I was overwhelmed by love and support.

I am forever changed post-loss. I’ve been given a perspective I wish I could share with the world, without the pain that went along with it. I live in the moment and enjoy every minute of life that I’m given. I have been given a front row seat to what really matters in life. My daughter, McKenzie, and I live life in a way that I know would make Chris proud of us. We’ve continued to live life and found happiness in our lives, while at the same time honoring his memory.

I have been unbelievably blessed with amazing friends and family that were there for us during the battle with cancer and since losing Chris from our lives. For that reason, I will do everything I possibly can to pay that forward that love and support to anyone battling this disease or to help educate the public on prevention and awareness. I pray regularly for those who have been touched by colon cancer; may God give us the strength to continue to fight this disease whether it’s as a patient, a friend or in memory of those we’ve lost. I am so thankful for organizations like the Colon Cancer Coalition and the work that they do to support research and awareness.

Join me and McKenzie at the Get Your Rear in Gear – Fort Worth®, we’ll be there every year! 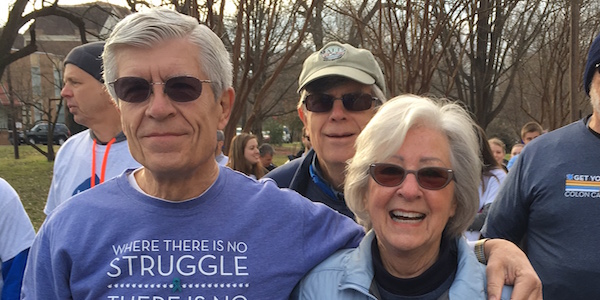