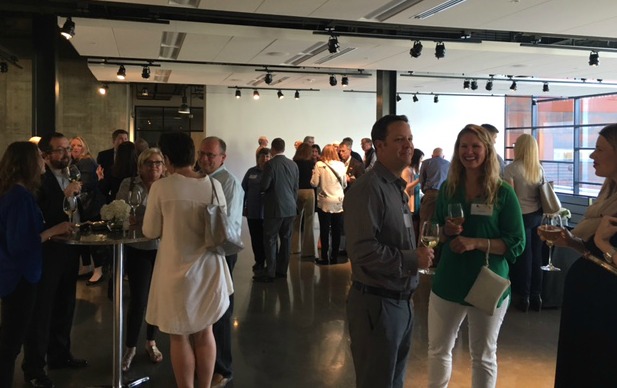 “Greater Assets,” a colon cancer art exhibit in downtown Tulsa, opened with great success this past March. With an estimated $10,000 raised to increase colon cancer education efforts in the Tulsa-area, the exhibit was not only a powerful awareness event during Colorectal Cancer Awareness Month, but a prelude to Get Your Rear in Gear – Tulsa, which was help on April 2nd.

The art exhibit, comprised of 21 colon cancer-themed pieces, was held at the Arts and Humanity Center of Tulsa (AHHA), and included works by patients, caregivers, and professional artists.  Katherine Anderson, chief of Naturopathic Medicine at the Cancer Treatment Center of America, said that in addition to the art exhibit, “we held a ticketed mix and mingle event on March 31 at AHHA. We had 55 attendees, and sold $5000 worth of art that night alone!” Sponsors included Hal and Patty Walker from Two days after the art event, the annual Get Your Rear in Gear – Tulsa 5K Run/Walk was held at the nearby Guthrie Green. Almost 200 participants came out to help raise colorectal cancer awareness, and additional funds to support screening efforts in the Tulsa-area. The volunteers behind Get Your Rear in Gear – Tulsa would like to thank these Tulsa Chapter individuals for their work on the exhibit and race: Jesse Powell, Amy Barger, Bob Hill, Dr. Rodney Clingan (St. John’s), Dr. Vicki Baker (Saint Francis), Chance Lambert, Whitney Dorsey and Cody Brown.