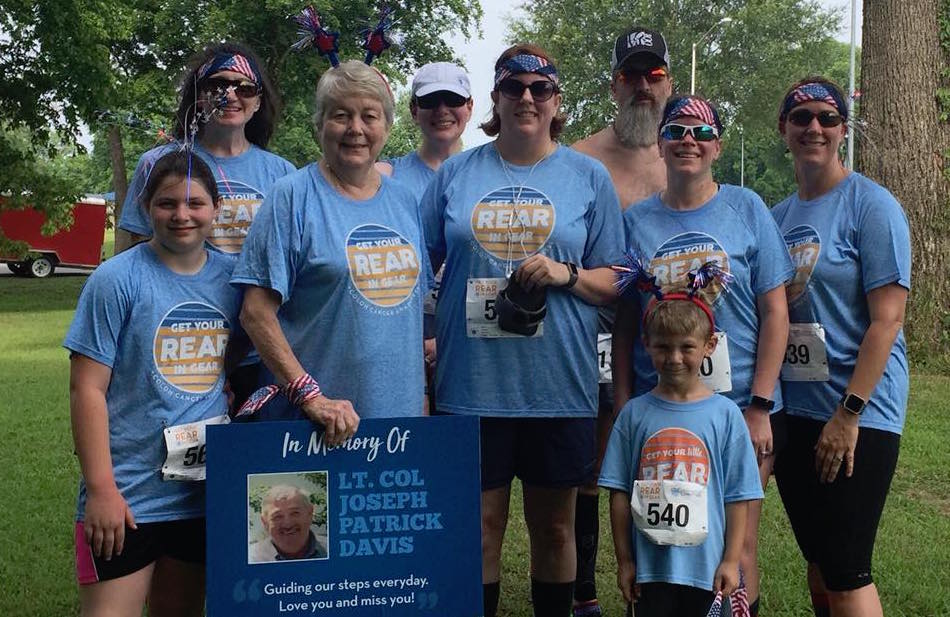 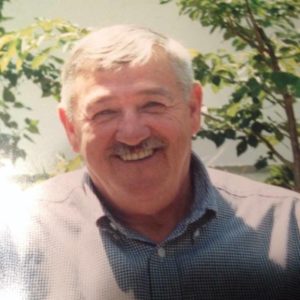 My dad was diagnosed with stage IV colon cancer in January of 2006 at the age of 62. He went in for the colonoscopy and he had lost 40 pounds for, probably, the last 3-4 months. He was having so much pain, and not being able to eat. That’s why he finally went and got a colonoscopy. That’s when they found the tumor.

He didn’t tell anybody until he was very, very sick and very thin. He went with my mother, finally, in that January after I had asked him repeatedly because he just looked bad. I finally was like, “What is wrong with you? You need to go get checked.” And just by coincidence, my mom was a gastroenterology nurse at the time. She was a nurse for probably about 10 years; she really liked it before my dad got diagnosed. He really thought he was dying right there, so he didn’t want to do anything about it. And finally, I guess it got too bad and he did. My mom and him went to go get a colonoscopy.

He never got sick; he never felt bad. His family was “if you don’t acknowledge it, it wasn’t really there.” So he didn’t go to the doctor ever until it was too late. He just never went, and for the longest time, I was angry at my mom about it, but you can’t make somebody do something that they won’t do.

I blamed my mom for quite a while, unfairly, probably for the first six months after my dad was diagnosed. I thought, she was a nurse and she knows the signs of colon cancer, so it was her responsibility to get my dad to go to the doctor. It was easier to blame her instead of my dad, because my dad was sick, but after working through my anger, I came to understand that I was really upset 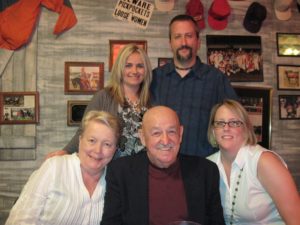 with my dad for waiting so long to go to the doctor. It was his responsibility to take care of his health, not my mom. My dad was very stubborn, “very manly.” I know now he was really scared and in lots of pain. And it was easier for him to be in denial. I was the one in the family who spoke the truth of his disease. Towards the end of his life, I think I was the only person in my family who believed he was going to die.

The anger for my dad went away also because I saw how hard he fought to stay alive. He went through lots of chemo and surgeries and treatments so he would live – he endured more than most people could.

My parents met when my mother was 17 while she was in nursing school here in Arkansas. Back in those days, in 1964, you couldn’t be married and be in the nursing program.  They would’ve had their 54th anniversary this year. They met on a blind date in the backseat of a car. Their best friends were dating and they met and two months later my dad proposed. My grandfather, my mom’s father, said, “That’s wonderful, but you’re not getting married for another six months.” That was around the time of the Vietnam War, so my dad, instead of being drafted, became a part of the military, and flew helicopters in Vietnam. We traveled all over the world until he retired from the military, here in Arkansas. 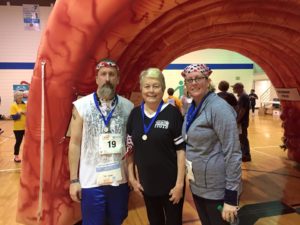 He had surgery to remove a grapefruit sized tumor from his ascending colon that January in 2006. The surgery was a success; they were able to remove the whole tumor. At the time of the surgery, they told us the cancer had spread, but after further investigation the doctor indicated that the cancer had not spread. Later they decided that it had spread. He went through chemo, probably for about six to nine months. The chemo wasn’t too bad. He was feeling well and able to eat again – he loved to eat.

Steak and baked potato was his most favorite. If he could grill it, he would. He was a master griller. He did the vegetables for me. I’m not a big steak fan, so he would make me chicken or polish sausages when grilling. My dad was an amazing cook. He was a gardener and loved to grow things and just to be outside. When in doubt, even in the heat of Arkansas, he was always outside. He was always happiest outside; so that’s why he loved to grill.

We had three really great years together as a family; my dad, my mom and my brother. All of his scans during that three-year period came back clear, but in January of 2010, a scan showed a spot on his liver. They performed surgery and removed half of his liver. The round of chemo that followed was terrible on him, but he “soldiered” through.

I can’t remember the duration of that chemo, but around the beginning of the next year, 2011, the doctors concluded that the 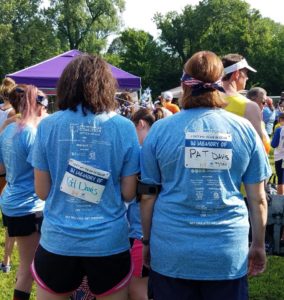 cancer had spread, so they were going to try more chemo. The last year of his life was terrible; the chemo was terrible. He didn’t want to stop trying and fighting. It was a very difficult time for my family; he was the rock of our family. Finally at the end of November 2011, he decided he was done with treatments.

We as a family shared our last Thanksgiving. He wasn’t able to eat anything, but he sat at the table with us. After only two and a half days in hospice care, he passed away in my old bedroom at my parents’ house on Friday, December 2, 2011. He was 67-years-old.

Our journey was tough. He didn’t like to talk about his cancer or chemo or surgery or anything related to the cancer. My mom was the same way. After doctors’ appointments or treatments, I would want a full report and they weren’t interested in sharing the details. Side note: I work in Quality Assurance so I need to know the details – it’s my personality. I think my parents and my brother believed my dad would beat the cancer. Probably the last six months of his life, my dad was an ass (sorry for the language). He was scared and in pain, and like a man, he couldn’t use his “words” to express his emotions.

I miss my dad every single day. For the longest time, I could only remember the period when he had cancer, but for the last couple of years, I’m remembering the many years and many memories with him without “my cancer glasses.” I want to use his illness and passing in a positive way by educating people in my life about colon cancer preventative and helping others when a parent dies. I learned about bills, wills, bank accounts, life insurance, etc., so I’m able to help others. I didn’t want to learn those things, but now I have good information for others. I’m at the age now when my friends’ parents are aging, so I’m quick to talk about them being proactive with their aging parents. 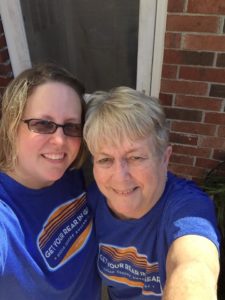 I came to realize after my dad passed, that if there was a crack in the sidewalk (issues in relationships), grief was like frozen water which makes the crack bigger. I’m not sure if that makes sense. My family had some rough years after my dad died – probably about two years. My parents were married 47 years, so my mom was lost without him. But through therapy for me, and her, we were able to move forward. My mom is a different person now – her own person. And I kind of pick up the “dad” stuff for her; I help her make decisions. We have a different relationship now. I think my dad’s illness and his passing brought my brother and I closer. We are very different people; we didn’t get along very well growing up, but when my dad got sick then passed and my mom struggled, my brother was very supportive of me. He didn’t want to make any decisions but he always supported my decisions related to my mom.

My brother and I are very proactive. I’m 43 and I’ve already had two colonoscopies and my brother is 45 and he’ll have his third. My dad’s oncologist recommended that we start at 35 so we’ve done that; all of our colonoscopies have been done by the same doctor. We say that, “a family that has colonoscopies together, stays together.” Because of the size of his tumor, the oncologist really felt like it was in there for at least 5-10 years, and so he really wanted us to be [proactive]. The other side of my family, my maternal grandfather, also had colon cancer, so I’ve got it on both sides.

I am very active. I’ve done Get Your Rear in Gear – Arkansas three years now, and I would like to be more involved in that. 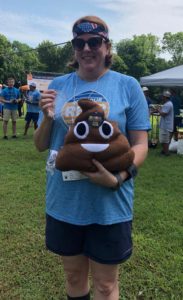 You can ask any of my friends and family; I’m the one that says, “You gotta go get a colonoscopy. If you don’t do it for you, do it for your family.” I go very personal. I always get the whole, “Yuck, no. Colonoscopies, that’s so invasive.” And then I straight up tell them, “I wish my dad had been more proactive, he would still be here with me. Yes, the prep is terrible, the colonoscopy’s nothing, and 90 percent of the time they’re not going to find anything. But if they do, they can take it out, and it won’t become cancer.” I get very personal. That’s the thing with colon cancer; you know if you catch it early, it’s very treatable. And with my dad, even then he had stage IV; he still lived three really great years. The last two were a little tough, but for three years we got to have him. 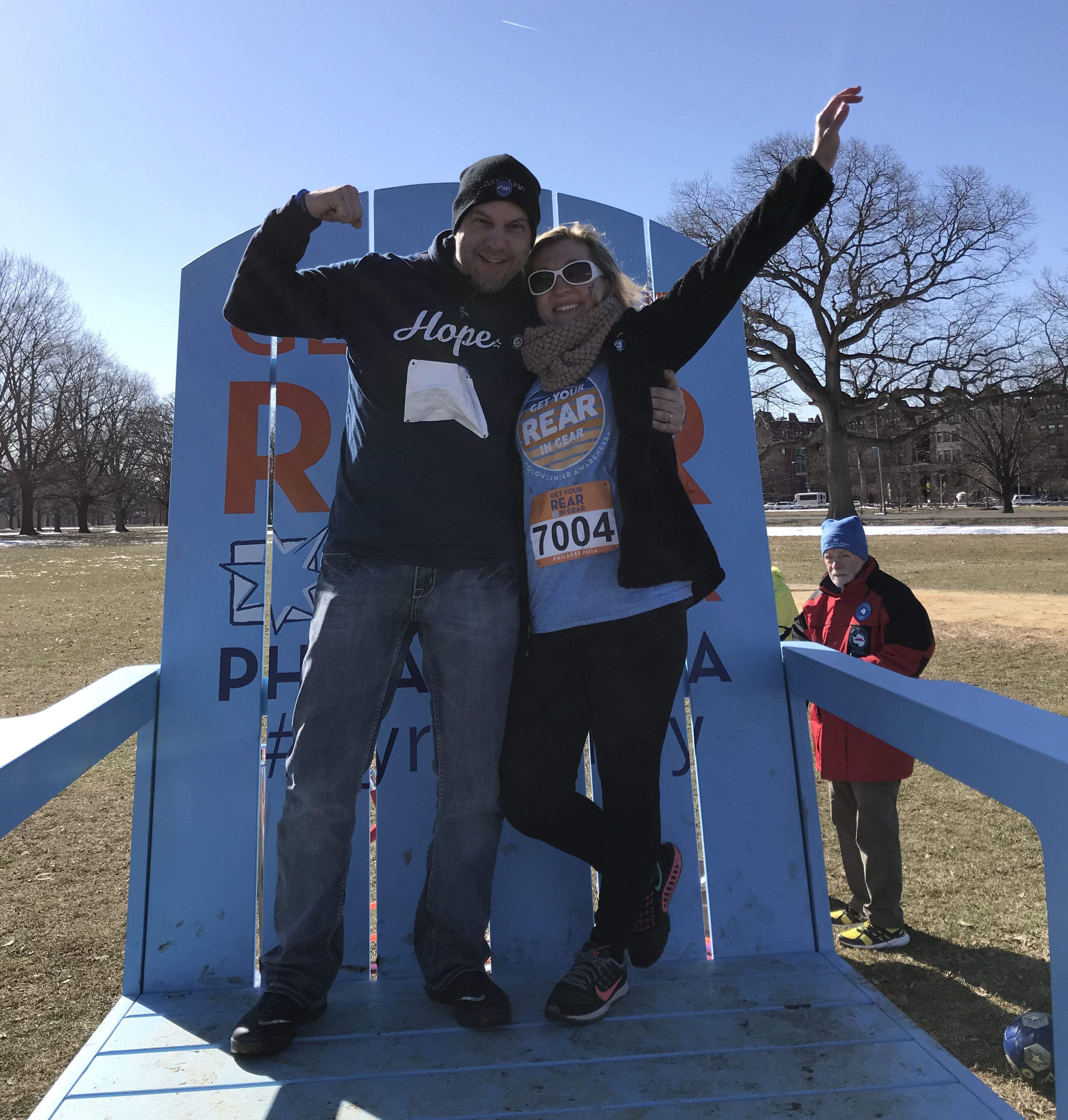