By Rachel LeeSeptember 29, 2021Faces of Blue 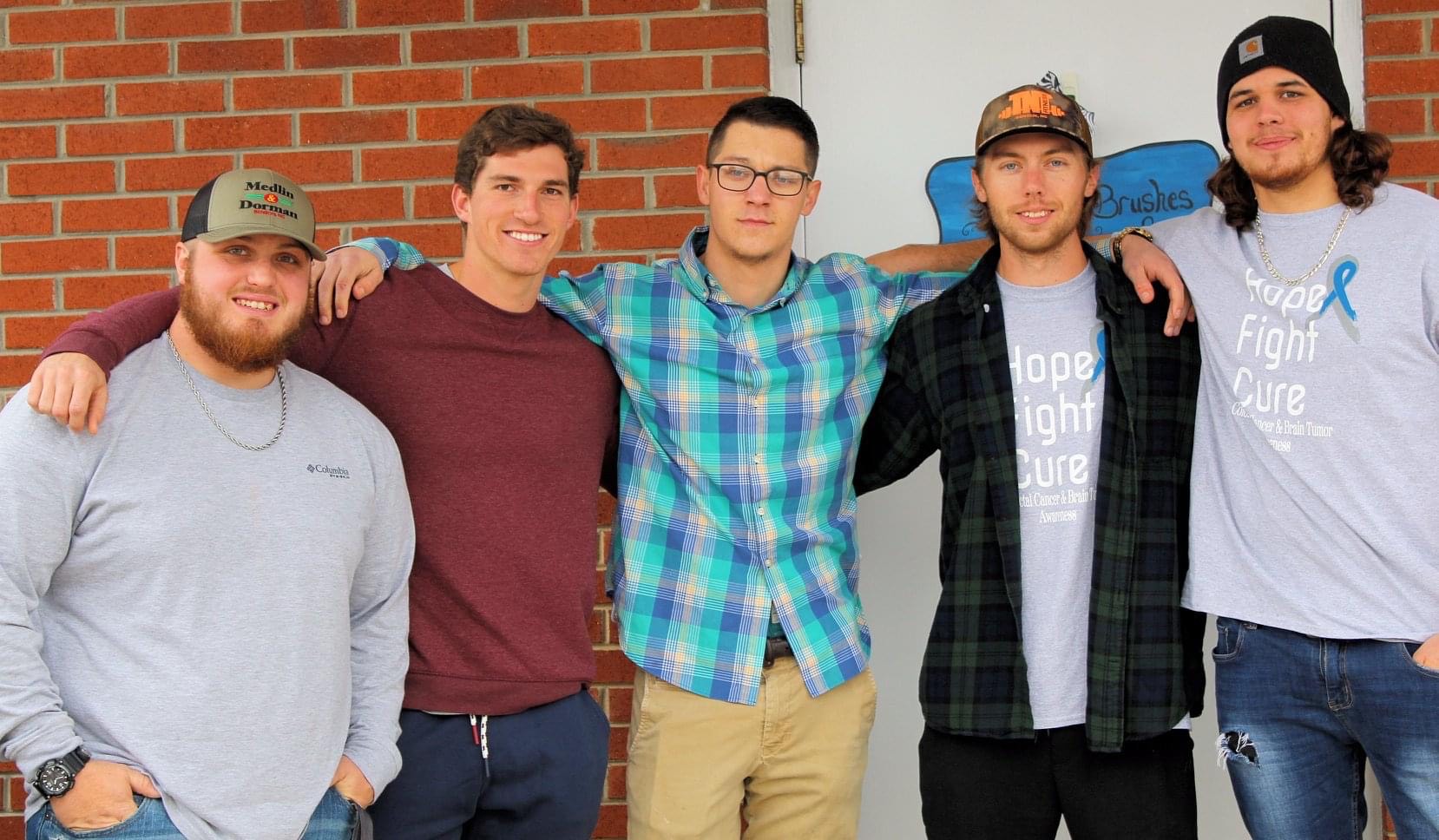 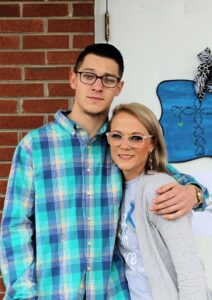 My brother Bradford was young, healthy, fit, and handsome. He had a heart of gold and gave all that he had no matter what. He showed all who went on this journey with us how to stay strong during the toughest times.

Bradford was 19, in college, and away from family when he first experienced symptoms.

At first, the symptoms seemed mild, but he eventually went to a local ER for abdominal pain that had not seemed to let up. There did labs and a CT scan. He was sent home with antibiotics which seemed to clear things up somewhat. A year went by and he moved back home. Never once did he complain but seemed to be sleeping 18+ hours a day. Next, we started noticing that his bathroom habits had changed to the point he could not finish a complete meal without going to the bathroom. We would ask if he was okay and he would say yes. He also had back pain and pressure near the rectum.

We finally convinced him to go to the doctor which was an internal medicine office that I worked at. Labs showed mild anemia. Then he was sent to a gastroenterologist for a colonoscopy. Things went really fast after that.

The doctor came in to tell me how things looked and I could tell by the look in his eyes something was not right. The colonoscopy was not able to be completed due to something large blocking the sigmoid. He told me that they would need to do some more imaging and send him to a surgeon. 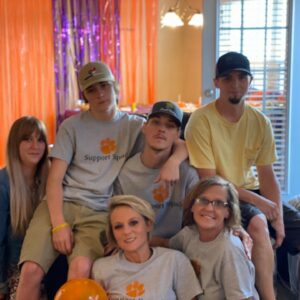 Bradford never once mentioned the blood in his stools. After the procedure, I was shocked to see the amount of blood in the toilet after he used the bathroom. He had a CT scan done shortly after that visit. In the meantime, we had a date scheduled for surgery. The surgeon explained that it could be a number of situations depending on what was found in the colon during surgery. We had our fingers crossed that it was something simple. Bradford was now 21 years old, and we never thought it could be cancer.

A few days before surgery I pulled Bradford’s CT scan. That was nothing but heartache in the report. I read two words over and over: “likely adenocarcinoma.” I prayed that I had misread it. There was no way my brother had cancer.

Surgery began early in the morning. We were all waiting in the room for the four-hour surgery to be over when the phone rang. Mom and I got up to answer. We were told to go into the smaller room and speak with the surgeon. A mass the size of a grapefruit was in the sigmoid. The surgeon explained that it was colon cancer of the colon and rectum, stage IV.

There was no family history of cancer in our family.

Life was a rollercoaster. A young, healthy, fit 21-year -old just diagnosed with stage IV colorectal cancer seemed impossible, so we thought it best to do some genetic testing. The genetic test was negative for everything. Next, Bradford had a port placement. Then it was a temporary ileostomy bag. Chemo was next. Bradford was adjusting well, with Mom as his right hand through it all. He fought hard through all the rough patches.

A month after surgery he started having blurred vision. The oncologist ordered a CT scan of the brain, and suddenly we were hit with another obstacle that was just as shocking as the first one. He had a brain tumor in the left frontal lobe of his brain. Due to concerns the doctor had about biopsy, we had to wait to biopsy the tumor and instead began chemo treatments for his colon. 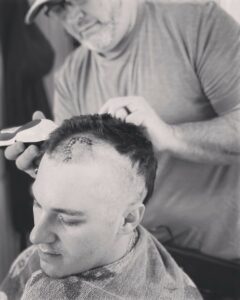 Chemotherapy was not as bad as we expected. He took it like a champ. Once he finished his CEA levels were at a 0. He was doing well. So well that he was at the gym every day building himself back up. We met with another neurosurgeon to see what they thought needed to be done about the brain tumor. We were told it was an aggressive brain tumor within the glioma family. We again opted to wait for a biopsy as the tumor itself was inoperable. I searched for another neurosurgeon and found the best of the best. Dr. Allen Friedman at Duke was my choice. I called to see if he would take on Bradford’s case and he agreed. We went to those appointments to establish Bradford with the possible surgeon that would complete the biopsy when he was ready.

We were all in hopes of much better days ahead. A year after all of this began he started living with friends again, he was driving and living the best life he could when things started to decline quickly. After three auto accidents, we realized the tumor was causing triple vision. A biopsy was done and gave us a better look at the tumor makeup and learned that Bradford had two primary tumors that were not linked – a very rare circumstance. The brain tumor was a grade II astrocytoma. Pressure began to build up so we proceeded with shunt placement. He was having a hard time staying awake, was frequently disoriented, and vomited often.

A few months passed and we were at the one year and a half mark when Bradford’s weight started dropping rapidly again and bathroom trips increased. The neuro-oncologist wanted Bradford to see a gastroenterologist to make sure all was okay in the colon area before starting radiation to the brain. 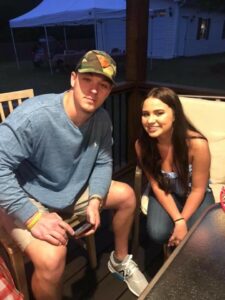 The news from the gastroenterologist was shocking. Bradford’s colorectal cancer was back, and it was back with a vengeance. We walked over to speak with a surgeon about possible options. There was no possible way they could do surgery on the area it was in this time. Another non-operable cancer we were faced with. Radiation was out of the picture as well due to the vital organs involved in the area.

Bradford took this news with a strong will that was typical for him. We all told him no matter what we would fight alongside him no matter the storm we would go through. Together we opted for brain radiation to continue as planned. Things seemed to become hazy from there.

His condition declined. The radiation was daily and he was not able to do much more. Bathroom visits were frequent. He had no control of his bladder or stools.

Almost two years after his diagnosis, his family decided to choose quality of life over quantity. He was only 22 years old when we brought him home to live his best life surrounded by family, friends, and love. 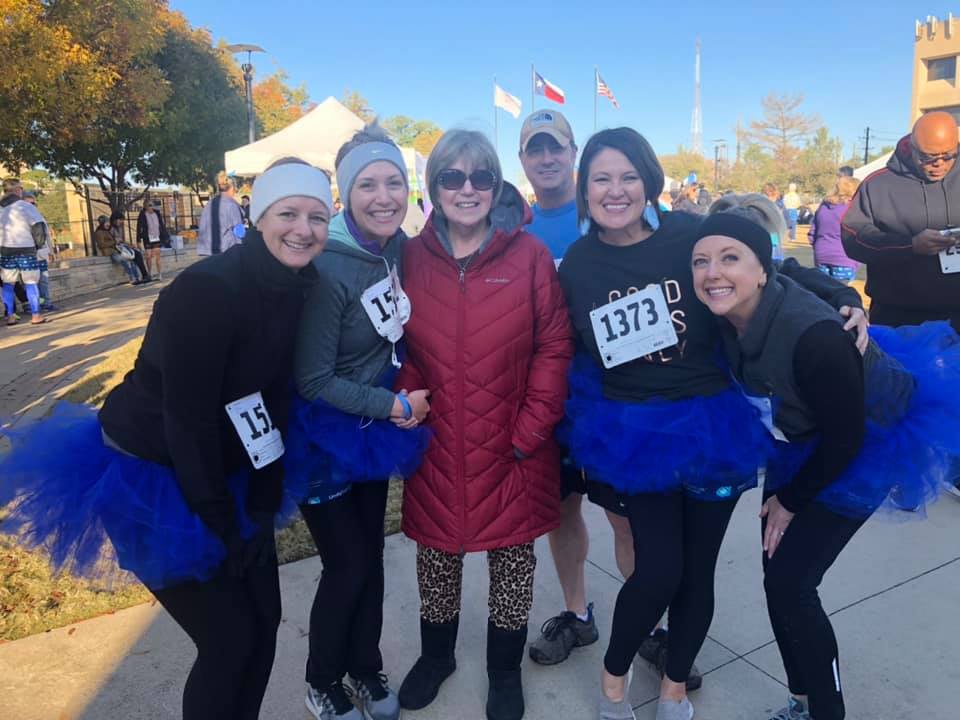