The Colon Cancer Coalition is excited to have been selected as one of four organizations to be recognized at the Schwan’s USA Cup Kick Cancer Day on Wednesday, July 20.

Kick Cancer will not only raise funds, but also gives the Colon Cancer Coalition and three other organizations the opportunity for exposure to USA CUP participants, coaches and fans.

Is Your Youth Team Playing in the Schwan’s USA CUP Tournament?

Encourage them to choose the Colon Cancer Coalition as their organization to support. 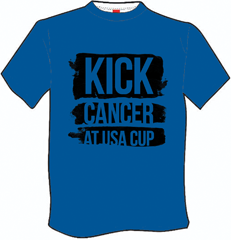 The tournament is unique as the only tournament of its size in the world that holds all its games on a single contiguous campus. It’s also known for its ambitious program of off-the-field activities that include an Olympic-style opening ceremony, a daily video show, live webcasting of selected games, social and educational activities for the players and their families, and tours to major Twin Cities tourist destinations, such as Valleyfair, the Science Museum of Minnesota, the Mall of America, and Bunker Beach water park.