By Emily AnleuMarch 3, 2012Faces of Blue 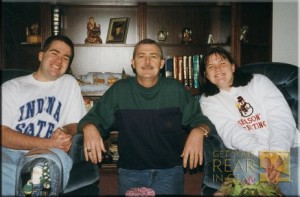 Dad was a polygraph examiner with the Indiana State Police, stationed in Sellersburg and Seymour. He loved fishing, playing guitar, singing with family, and spoke like Donald Duck (which the kids loooved to hear him do!).  He also loved watching sports and cheered especially for the IU basketball team and Indianapolis Colts.

He was involved in the Indiana Polygraph Association (served as President for a time) and also the American Polygraph Association (served as Vice President of Law Enforcement for a time). In 1996, he received the William L. and Robbie S. Bennett Memorial Award from the APA which honors “unrelenting efforts and display of ability in the interest of the APA”, in 1997 he received the Al & Dorothea Clinchard Award from the APA which honors “extended, distinguished, devoted and unselfish service on behalf of the APA membership”. After his passing, the APA created the David L. Motsinger Horizon Award which recognizes “a new shining star in the profession or association who early in their career demonstrates loyalty, professionalism and dedication to the polygraph profession”. He was also a member of the Masonic Lodge in Seymour, IN where he served as Master Mason and President for a term.

Dad fought this horrible disease for a short 10 months, before losing the battle in March 1997. Dad was first diagnosed with colon cancer in May 1996. At first he was diagnosed as having Stage 1 colon cancer. However, a few months after he had his colon surgery, he was having pain in his shoulder and hip. They found he had tumors in his bones and he let the doctors know he had the same pain in his shoulder before he was diagnosed with colon cancer and they reclassified his case as Stage 4. He was receiving treatments in Louisville, KY through Jewish Hospital, but after receiving this news he travelled to Houston to get a second opinion on experimental treatments. They performed some more scans, and the doctor explained there really wasn’t anything else they could do. He was then told that his life expectancy was around 16-18 months. Upon returning from this trip on Friday, he was in considerable pain throughout the weekend. On Monday, he fell into a coma and passed away later in the evening; he was at home surrounded by his family. His oncologist believes that he actually passed away from a blood clot due to the fact that he was in the later stages of his cancer and the increase in chance of throwing blood clots while receiving chemotherapy and flying.

I feel he would be so happy and feel honored that Josh and I have gotten involved with Get Your Rear in Gear. Last year was the first year that I read about this amazing program and races. I immediately contacted my brother about starting a team. I was always looking for a race to raise money for Colon Cancer in Indiana. We definitely want to do what we can to raise funds and awareness of this disease so others don’t have to go through the pain that we did of losing our dad at such a young age. Our team for the race in Indianapolis is “Team X502” which was his car number for the Indiana State Police. We feel this best honors him for what he loved to do and the legacy he’s left us. The race in Indianapolis is always held the weekend of Father’s Day, so each year from now on we will be able to do something to make him proud and remember him.