Faces of Blue: My friend and co-worker, Evelyn 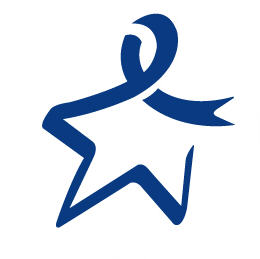 Living and working with colon cancer…

No, I don’t have it, my co-worker and friend does.  Her name is Evelyn and she is a youthful, vibrant, smart, hard-working woman in her early 60’s who has no family in town to support her.

Three years ago, I joined a non-profit for which she is executive director.  We worked well together and became friends quickly.  A year later, Evelyn needed a ride to get a colonoscopy.  I drove her to and from the appointment.  Her primary doctor had been urging her to get a colonoscopy, finally making an appointment for her.

After the procedure she told me they had found a malignant polyp.  She described it as dandelion-like with a long stem and a head.  She was told the cancer was a “very aggressive form.”

After additional tests, another colonoscopy and MRI, she was told the results showed no evidence of additional malignancy at the site of where the polyp had been removed or anywhere else in her body.  A Twin Cities team of highly respected doctors collectively decided she would not need any further treatment other than a colonoscopy annually.  She and I were elated by the news, and went back to doing  “business as usual.”  It seemed like it was caught early.

But, that was not the case.  This fall, she felt a lump in her thyroid and was preparing to determine its nature, when she had a sudden attack of fever and terrible pain in her right side, radiating into her arm and neck.  New tests were run to find she had at least eight malignant tumors in all quadrants of her liver and most likely the thyroid as well as a lymph gland, and a couple of other places could have malignancies too.  Her colon appeared clear.

She is now taking chemotherapy once every two weeks and has received her first results:  after six weeks the tumors are shrinking a little.  Surgery is not an option at this time.

The first group of doctors here in the Twin Cities who gave her the all-clear prognosis has an excellent reputation.  So what happened?  She was told that 95% of cases like hers would not reoccur.  She was in the 5%.  We just learned from her new doctor that most likely the “soft tissue” at the site of the polyp was not seen by the first MRI.  But mostly likely it was from that place the cancer spread.  Perhaps, a second opinion would have been a good thing two years ago.  But the reality is we all wanted to believe the “good news” and trusted the experts in their assessment.  We wanted to get back to our normal lives.

We’ve also learned that colon cancer tends to go directly to the liver.  Perhaps, with that knowledge, she would have pursued the second opinion.  But she didn’t have that information.  Certainly, now if I heard “aggressive form of cancer” and “no additional treatment necessary,” I will advocate for additional expert opinions.

As a friend, I want to “be there” for her.  To help in anyway she needs me to.  I don’t know what that necessarily looks like.  I need to recognize her needs will be unique to her and I will try and be sensitive and perceptive to what she is saying.  Sometimes, she will need to tell me or ask me to help her, and I am trying to check in with her as well.  There are very practical needs like rides to and from the Mayo Clinic.  Listening carefully, being willing to acknowledge the reality of her situation, helping her process the details and validating all her feelings seem important.

As a co-worker there is a balancing act of supporting Evelyn and doing the work.  In our small office of three, the emotional impact was and still is huge.  I find we are on this journey of hers together, sharing the same shock, sadness, and at times helplessness, as well as celebrating the good news when it comes.  The work continues to move on and there is stress in picking up more work.  Everyone in the office needs to be flexible, accepting that we are not “business as usual.”

One thing I wonder about in regard to helping someone who has just received a diagnosis of colon cancer or any serious diagnosis and is feeling scared and helpless and exhausted by the emotional toll; and wishes to get a second opinion:  Due to our ability to use technology, it would seem reasonable that our healthcare facilities would be compatible with one another so that they would be able to facilitate the transferring of different tests done prior to the second opinion.  In Evelyn’s case, she had gone to several different groups of doctors and each had ordered different tests.  She found herself driving from one end of the metro area to the other, literally all day to pick up the tests and the results she had had to-date, leaving her even more exhausted and in more pain.  One would think for the emotional and physical good of the patient, the different facilities and groups could adopt a universal system to allow for sending everything needed to the clinic giving the second opinion.

A diagnosis such as colon cancer requires living one day at a time.  We are not equipped to handle more than that.