By Emily AnleuApril 1, 2013Faces of Blue 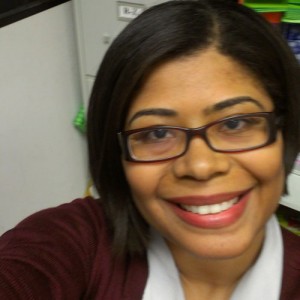 My name is Rosanna and my story began December 2011 when I was experiencing frequent and persistent stomachaches, stomach growling and ever-present discomfort.  It became concerning to me when one night I could not sleep as I felt very uncomfortable with the stomach pains and the only relief was sitting on the toilet, that night I saw blood in my stool and cried myself to sleep as everything I had read about blood in the stool was negative.

I immediately visited my PCP who referred me to a GI who sent me for an ultrasound, and on December 31, 2011, performed an endoscopy. My GI reported that he found mild gastritis, I remember asking him “gastritis causes blood in the stool?” and he said “yes.” He sent me home with Nexium which made my stomach pains worse and later changed it to a slow release pill that worked better. When I returned for my follow up he told me that a biopsy was positive for H Pylori and I was treated for it with antibiotics.  After that I just lived, as it was normal to have frequent stomach discomfort as I had “Gastritis,” which I found that is a common occurrence in many people. I remember thinking to myself “many people live with gastritis, I must be a baby to find this so problematic for me.”  The year went by with me trying to manage my stomach pains the best I could.

In November 2012, I started having dizzy spells, feeling very fatigue, craving ice like crazy and having difficulties falling sleep do to restless legs.  I visited my PCP who sent me to the lab for blood work. I remember being assigned the task of serving the dessert during Thanksgiving dinner and not being able to cut the pie or serve it as I felt so dizzy and weak, the next morning I went to the lab to have the test the doctor ordered done, five days later I received a courtesy copy of my lab results documenting hemoglobin at 7.5, extremely low iron and saturation levels and ferritin of two. I knew these were concerning reports as the results were marked in red and had the word “alert” next to it, plus I googled it right away.

I waited a day for my PCP to call me and tell me the plan and after not hearing from her on day three, after feeling extremely weak I decided to go to the emergency room. I was already alarmed by the blood results and decided that for this I would visit the emergency room, within five minutes of registering at the ER the nurse triaged me and found my heart to be working very hard at 130 beats per minutes, something else to add to my symptoms. The doctor came to see me so fast that I did not even have time to change into the gown. Let’s just say that he got to know me very quickly when he informed me that given my symptoms he had to do a blood occult test. When he explained what it involved I pleaded with him to leave for later, he won and did it right away. The test was negative. He proceeded by ordering labs that documented better hemoglobin of 8.6, I remember smiling and saying, “Good, can I go home now.” The ER doctor reported that given the severity of my symptoms he would have me admitted for blood transfusion and further testing.  It seemed surreal to me as I have never been admitted, or for that matter, never been really, really sick.  I received two blood transfusions, chest x-rays, echocardiogram, two CT scans, endoscopy and colonoscopy.

I remember meeting with the ER GI for my endoscopy and trying to convince him that I would do the colonoscopy outpatient as I wanted to go home. That’s when he mentioned that they had seen a mass behind my liver in my CT scan and highly recommended that I stay in the hospital and prepare for the colonoscopy the next day.  I remember being slightly defiant as I wore my pajama pants all the way to the procedure room and unveiled myself at the last minute. I just wasn’t happy being in the hospital.

The procedure started shortly after, I remember waking up in the middle of the procedure and looking up at the TV screen where a live stream of my colon was being seen, the nurse noticed it and placed herself in front of me and I was out like a light after saying “oww, oww” several times, the GI later told me that I woke up right when he got to the area where the tumor was and proceeded to tattoo it with the markings for the surgeon. After the procedure I was taken to a private area to recuperate.

I could hear the nurses whispers and it just seemed different then the day before where the doctor told me right away about endoscopy results (mild gastritis, nothing concerning). I asked the nurse for the doctor, as he was taking a long time. He told me he found a large mass that occupied 75-99% of my transverse colon, he told me that he recommended that I stay in the hospital and have surgery to remove it as soon as possible.  He gave choices of surgeons and surgery procedures. I chose to have a laparoscopy surgery for my right hemicolectomy.

I remember being in a fog and talking to the surgeon like nothing was wrong until he told me that my parents were outside waiting and asked me how did I want to tell them about the news, then everything sank in and I started crying.  I knew that a mass equaled a cancerous tumor to me.  The GI told me that we would not know until after the tumor was out and sent to pathology, but that he thought it was cancerous, I was happy about his honesty. It helped to prepare me for what was to come.  I met my laparoscopy surgeon within 15 minutes after the news and she helped me to tell my parents (ok, basically she told my parents, I could not speak at the time) they seemed to take it well and spoke positively about the information they were being told. I later found out that when they left me they became basket cases and called everyone in the family.

Things progressed very fast after that and I had my surgery, which by the way was the worst pain I had ever had to deal with. I made it a point to do what was needed to be discharge (the key was to have a bowel movement) on the third day I did, and the happiness that my family and I had, could be compare to winning a Grammy or something like that. I was congratulated all around and that day I was discharged.  Later my surgeon told me that she was amazed that I was able to do so well and be discharged three days after my surgery.

December 10, 2012, I was diagnosed with colon cancer (with no family history) almost a year to the date that my symptoms started. I believe that I could have been diagnosed the prior year if the GI would have looked further and done the colonoscopy, but he found mild gastritis and that is where everything stopped. Needless to say I fired that GI and my PCP, who left me a message two days after my hospital admission reporting that I had anemia and to go the pharmacy to get Iron pills.

I believe that everything happened this way for a reason. I needed to be at that hospital that Wednesday night. I could only imagine had much longer would my colon cancer be undetected if my PCP would have called me in timely fashion and I would have started the iron pills, maybe many more months.

When I visited the oncologist he informed me that I had colon cancer stage 3III, N2, M0 and although four lymph nodes were positive they had not traveled to any other organs, but I had to start adjuvant chemo for the next six months and have 12 chemo sessions.  As I’m writing this I’m receiving my fourth chemo infusion and I’m doing well.

I always look for the silver lining in things and I found many: I had the best medical team ever at the hospital, they made me feel comfortable, informed and well taken care off. I lost several pounds after changing my diet, I’m learning each day to eat and be healthier and I’m fortunate to have a great support system who are always there to accompany me to my chemo sessions, make me chicken soup, and never say no to my requests.   So I decided to join the Get Your Rear In Gear foundation in raising awareness about colon cancer. I will hopefully have 10 chemo sessions under my belt and the energy to do the 5k walk/run.