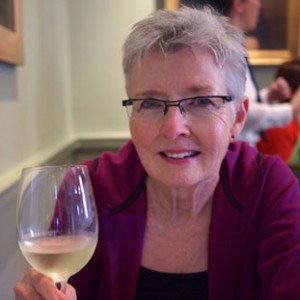 I am 65 years old and worked for 25 years in the corporate world.  After leaving my job, I discovered the joy of creative writing.  That became my passion and I had several stories published until 2004 when my granddaughter was born and my writing became a hobby!

About the time I started seeing blood in my stool, my daughter was in the midst of a difficult second pregnancy and was likely to deliver very early. I called my doctor, but said I suspected the blood was caused by all the stress our family was under.  Besides, I had had a colonoscopy three years earlier that was fine. She said, just to be safe, I should make an appointment for a colonoscopy. When I called, their schedule was full, but they said they would let me know as soon as there was a cancellation, which is apparently, and sadly, quite often.

Shortly after that, my daughter gave birth, at 26 weeks, to a little boy (2 lbs. 4 oz.).  Whether there was a message regarding an opening, and I just missed it, I’ll never know, but it never entered my head again for the next six months.  Baby Liam spent three months in the NICU and my husband and I visited nearly every day.  When Liam finally came home I moved in with my daughter and her family for three months to help with his intensive care.

After I got moved back to my home, I sort of thought, “Oh, yes, I was supposed to have a colonoscopy!” The procedure took place two days before Thanksgiving, 2008.  When the doctor came into the recovery room and told my husband and me that he’d found “something” and even if it weren’t malignant, it would have to come out, I being still half out of it ask it if it would be day surgery.  Ha!

Ten days later, I had a bowel resection and 12″ of my colon were removed, because a large fibroid in my uterus (that I never knew I had) was blocking the surgeon’s view. I also had a complete hysterectomy.  A two for one!

After a week in the hospital, I home knowing everything had gone well and my lymph nodes were clear, but I didn’t find out for six weeks that I wouldn’t have to have chemo.  That was a very happy day.

I had to be careful about my diet for many months afterwards.  About six months after surgery I had a bowel obstruction and narrowly missed having to have another surgery.  For several months after that I didn’t eat many of my favorite foods beans, leafy salads basically things that might clog the plumbing. As a result, I have been more consistent in my keeping my diet “clean.”  I find sticking to my exercise routine easier because I heard so many times that my recovery was faster because I was in good shape.

I was very afraid, when I realized that I had put cancer on the “back burner” for six months, that I had lessened my chance for a good outcome. Almost five years later, I’ve had two colonoscopies, and continue to have blood work every six months, and so far, so good and most importantly, our sweet Liam is doing great!

I say a little thank you to Katie Couric and Dr. Oz who have done so much to raise awareness about colon cancer and, just as importantly, in talking publicly, have given us language to use when we have to broach the subject with our doctors.  These symptoms are not as easy to discuss as a pain in your back, or even a lump in your breast, but, for the sake of your family, if something’s not right, swallow your embarrassment and get thee to thy physician!!