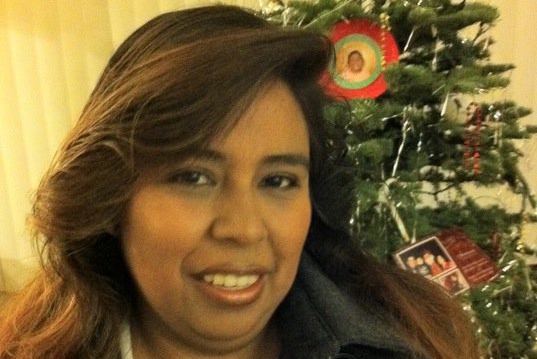 I was 36 years old when colon cancer came into the lives of my husband, my then 7-year-old daughter and I.

It was 2009; I had been feeling tired and was already being treated for low iron. My iron had not been binding for over a year; we went from pills to stronger pills to liquid iron infusions. Brenda with her husband and daughter.

In November of 2010, we discovered I had some tumors in my uterus, which were removed. I felt better than I had felt in years; they tested the tumors and no cancer and I couldn’t have been more grateful. Little did I know that 2011 was going to bring my family and I the fight of my life. The word cancer always scared me, because I had seen that disease take the life of my aunt back in 2003.

In early January 2011, my iron began to drop again, concerned I asked the PA for a scan, she refused and said that my iron was not binding and she saw no need for a scan. I let it slide, but things got worse, so I was referred for a colonoscopy in the month of March. I got the approval and scheduled my appointment, but they did not have an appointment until April 29th. I had horrible pains on my left side of my abdomen and everything I ate made it hurt even more. I was so busy that having this pain was an inconvenience. I was just about to finish my graduate program and was under tremendous amounts of stress.

April 29th, I am sitting in the waiting room with my husband David right beside me. I have to say I am blessed to have such an amazing man by my side. I went in and less than twenty minutes later I was awake. I immediately knew there was something going on. The nurse took me to go see the doctor and he said that nothing was for sure because of my age that it could not be colon cancer. I was “too young” for that disease and not to worry. I immediately contacted a surgeon in my medical group and requested an appointment for May 2nd. The colonoscopy was on a Thursday and the results would not be in until Monday. That had to have been the longest days of our entire life. I remember telling my husband that I did not want chemo, but that I wanted to live my life and forget about cancer if that was what the outcome was going to be.

It was May 2nd, the day I had been waiting for, hoping that the news would be good. Dr. Baba comes in and has a smile on his face; I was relieved to see that he looked happy. He flipped through the file asked how old I was. I told him my age and he suddenly looked concerned. I still remember my husband sitting by the window and I was on the examining table. The doctor then said, “I am sorry you have colon cancer.” That moment changed my life forever. I looked over and saw David and by this time he was holding me. It has to be the scariest feeling I had ever felt. I thought about my child, my husband, mom, dad and brother. A few minutes went by and the doctor said that we were going to have to have surgery. Brenda and her family enjoying time together at the beach.

It was the beginning of May and the doctor tells me that he has an opening in July. I would not settle, I had a family that was depending on me and I was not going to allow this tumor to grow any bigger. I told the doctor right then and there that this was not an option. Here is where I encourage anyone who is going through this that you are your best advocate. I pushed so hard that I had surgery 1 week later on May 10, 2011.

The day before my surgery, I get a phone call that the insurance had not approved my surgery. Once again I got on the phone and called everyone and I mean everyone. I finally got my approval and surgery happened as scheduled.

I was in the hospital and while I was there I realized those people that cared were always there. I had friends come and stay the night with me so that my family could rest. I had my husband as my biggest supporter. After being released from the hospital, I had to undergo a series of chemo sessions. I was mad, and knew that this was the only thing that would allow me to stay with my husband and child longer.

The results came back and I was diagnosed with stage 3C colon cancer. Every time I went to a new doctor the question was “wow you are so young.” The misconception people have that this does not happen to younger people made me very upset.

I went through 6 months of chemo and right before my last session my cell count was off and we had to postpone my last session. I cried so hard because I was counting on this being my last one. So the week of Thanksgiving November 2011 I finally had my last session.

Today I am going on my 3rd year of being disease free. I am scared everyday that this may come back and I hope that it does not. One thing I always do is try to tell my story so that those people that are in fact “young” can get checked. This disease is everyone’s disease because it takes a toll on everyone that is emotionally invested in the person with cancer.

I am cancer free and I am in the best place that I could be in my life overall. I am a happy wife and mother and it is thanks to the support of my family and friends that I have been able to get through this. My husband, brother, mom, dad, and my little one have been my support and will continue to be the ones that I fight for day in and day out and I look forward to spending so many more years with my family.