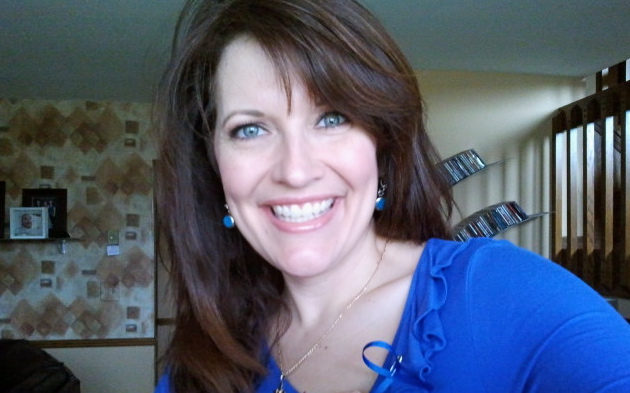 As a young teen I was diagnosed with endometriosis and ovarian cysts. These created chronic pain in my back, abdomen and irregular bowel issues. In my early twenties I started noticing more blood in my stool. Kelly with her husband, Bob and son, E.J.

My mother had told me that her dad had surgery to remove a portion of his colon. This was for early stage colon cancer when he was 71 years old, so I made an appointment for a Proctoscopy. I was not looking forward to this experience.

Fast-forward almost ten years and I still had the on again, off again blood in my stool and irregular bowel movements. I kept dismissing these symptoms because of my internal hemorrhoids and female health issues.

In August of 2006 I had a total hysterectomy oophorectomy following my long battle with abdominal issues, endometriosis, ovarian cysts and a strong family history of female cancers. After 3 months of follow-up evaluations my internal hysterectomy incision was not healing and I still had the symptoms of colon cancer, but those symptoms also mimicked some of those similar to postpartum and post surgery. And why at the age of 36 would anyone say, “Hey, when’s the last time you had a Colonoscopy?”

At the end of November, a biopsy of the vaginal cuff was taken, and I was referred to an oncology OB/GYN, for surgery. I was told I had cancer in my vagina. I had a hysterectomy to avoid cancer and now I was told the only girly part I have left was cancerous! I was beyond feeling frustrated.

The next 96 hours were a blur. Not only did I have a ton of medical tests and surgery, but also Milwaukee was hit with two blizzards back-to-back. We had to arrange childcare again for EJ. It was like what we had done for my hysterectomy recovery, and I was also required to reschedule my Mary Kay business for at least the next 8 weeks. At this point, Bob and I had no idea where my condition would lead and what kind of diagnosis we could expect.

The surgery was the first in a series of God’s miracles to save my life. The more than six hour surgery revealed stage IV colon cancer. During this surgery they removed a foot of my sigmoid colon with a racquetball-sized tumor, forty lymph nodes, three tumors on my liver and they rebuilt my vagina. One of the tumors on my liver was in the back and was very difficult to get out. Kelly as the June 2013 model for last years Colondar.

They were updating Bob during the surgery and told him they were going to close me up and leave the tumors on my liver. My odds of survival would go up if the tumors could be removed. My angel, Dr. Bowman, a Vietnam vet with field surgery experience, came to my rescue and removed the tumors from my liver.

After awakening from that very long surgery, Bob and I had to figure out what to do. A million things ran through my head after that: diagnosis, treatment options and facing my own mortality.

My husband Bob was the catalyst for all of my medical decisions. He was the caretaker for our beautiful son, who was 18 months when this all began, and having him as my spouse is God’s blessing to me. My son has a wonderful role model to follow, because his father was his mother’s caretaker.

Together they fought against her Multiple Myeloma for almost ten years. We worked as a team to keep my spirits focused on healing. It was done one day at a time.

My new year began with a power port installed in my chest, twelve rounds of chemotherapy FOLFOX IV, a 5FU pump, Avastin and a lifestyle change that I never imagined. The neuropathy was devastating. Swallowing room temperature water only to have it feel like broken glass going down your throat, wearing gloves all the time in the house just to do laundry or make lunch for our son. This was all temporary, and I knew I could do anything for a short period of time to kill the cancer left on the margins on my liver. Kelly and her son E.J.

In April I noticed about half my hair had fallen out. God blessed me with a full head of hair so that was not noticeable to others. My goal was to make chemo “look good”! Not having to shave my legs, arms, and such was not really a benefit in the cold Wisconsin winter.

In May of 2007 we visited M.D. Anderson Hospital in Houston. It was on that trip Bob and I heard from a doctor, for the first time, No Evidence of Disease (N. E. D.). The chemo and surgery worked and there were no margins left on my liver. The doctor told us to go live our lives without worrying about a recurrence. I finished chemotherapy on June 6, 2007.

I am cancer free, No Evidence of Recurrent Disease, N. E. R. D. for short. I love that phrase so much I tattooed it to my abdomen. It is impossible to return to my old life. This journey has built my courage and self esteem. My biggest goal is to nurture others, to return the charity and compassion that helped me to survive. I am passionate about reaching out to other families touched by cancer. I know what a daily struggle it is.

I was honored to be the colon cancer survivor for the Relay For Life, Get Your Rear In Gear, and one of twelve colorectal cancer survivors under 50 in the 2013 Colondar.

You should always be aware of symptoms, don’t be afraid of the prep and don’t think it couldn’t happen to you! Share stories from survivors to spread the message of hope.

Life is a journey, not a destination. I want to end today knowing we’re one step closer to a cure.