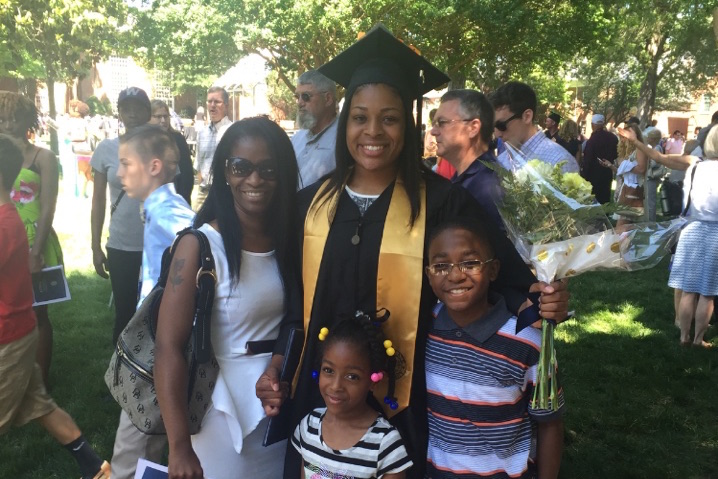 My mom, Shemeka Neely, passed away on Monday September 18, 2017, to colon cancer. She was 43 years old. When she was diagnosed it was really hard on us; we really didn’t know what to expect. No one else in my family really had colon cancer, or any cancer. So it was kind of hard to deal with.

She didn’t tell us [the stage]. The doctors told her, but she didn’t want to tell us. She didn’t want us freaking out. When she was first diagnosed, it wasn’t as bad, but for the last five months before she passed, I could tell it was getting worse and worse.

She was a fighter; she was strong, and was the backbone of our family. She told me she would fight as long as she could, so that she could be here for us. She wanted to survive for us. That’s what she told me.

She had stomach pains a lot. I was a junior in high school, back in 2011, I remember going to the hospital with her. She had a lot of stomach pains, was throwing up, and become nauseous. She would have to go to the hospital and they would have to give her medicine and exams. A year after that, that’s when they diagnosed her. The first time she went in, they couldn’t find anything. She kept going back in, they kept running tests and finally found something. We were all there [when she found out her diagnosis].

At first she got her gallbladder removed, she thought it was that at first. Then found out it wasn’t the gallbladder, but the cancer was giving her gallbladder problems. She had a bunch of surgeries with her intestines. They removed part of her colon, because it got so infected that she started having bowel problems; she couldn’t use the bathroom, so there was blockage in her colon. She had a couple of surgeries; she had surgeries back to back within a month. It was hard. Once you go in there one time, it’s real risky to go in a second time. They went in a second and third time. She tried working, but it came back. At first, when she started taking chemo, it went away, but then it came back within a couple of months later. She couldn’t work at all. She had to leave work early because it was so bad; she was so tired. She took a year off of work.

I never thought I would see the day of her not being here with us. It still doesn’t feel real to me. It’s like a bad dream that I can’t wake up from. I was so caught up in my schoolwork, basketball, jobs, and everything else, that I didn’t realize how much my mom was getting sicker day by day, or maybe I did know, I just wanted to avoid reality. I tried to do as much as I could but I still blame myself for not doing more. I wish that I could’ve taken more time to tell her I love her, to help her, and to be with her as much as I could. I was too worried about “me” instead of doing more for her. I was in denial and tried to stay as busy as I could so I wouldn’t have to deal with reality. I wanted everything to feel normal but it wasn’t.

I should’ve held off my opportunities because they would’ve always been there for me, but my mom’s life wouldn’t. And now unfortunately it’s too late to get back that time with my mom. Now the only thing I can do is do right by my brother and sister, like she had asked. My mom leaves behind my sister, Nadia (7), my brother, Tommie (13), and myself (23). As you can imagine this is hard on all of us especially as we try to complete school. I have support from my family, but at the end of the day I want my mom back. My mom had a huge heart and was the strongest lady I knew. Why my mom? Why cancer? Why did she have to suffer for so long? Why didn’t the chemo work? Why did God have to take my mom right now? Why did I have to watch my mom die and suffer for so many years? I pray to get my life right with God so I can understand more. I pray that he gives me the proper guidance to raise my siblings. No amount of money, support, or anything will account for this devastating loss. I want to raise awareness for this horrible disease! I think [Get Your Rear In Gear] is a great event! I also hosted my own youth basketball clinic for colon cancer: “Crossover” Colon Cancer Youth Basketball Clinic; to raise awareness and to also help with further colon cancer research on March 17th at Mallard Creek High School. It was really awesome. I had about 40 participants. I charged them $10 and all the proceeds went to Carolinas HealthCare Foundation. Then I had a sponsor from Jimmy John’s, they provided the lunch, and brought sandwiches. I was really relieved and feel accomplished. I think I want to do the clinic annually, next year, probably around the same time again, and make it a bigger event, have more people there and plan it a little differently than I did; just to have more donations and such. Participating in the colon cancer walk, it was my first time; it was great. I’d probably do that as well, again next year. I hope I am making my mom proud.