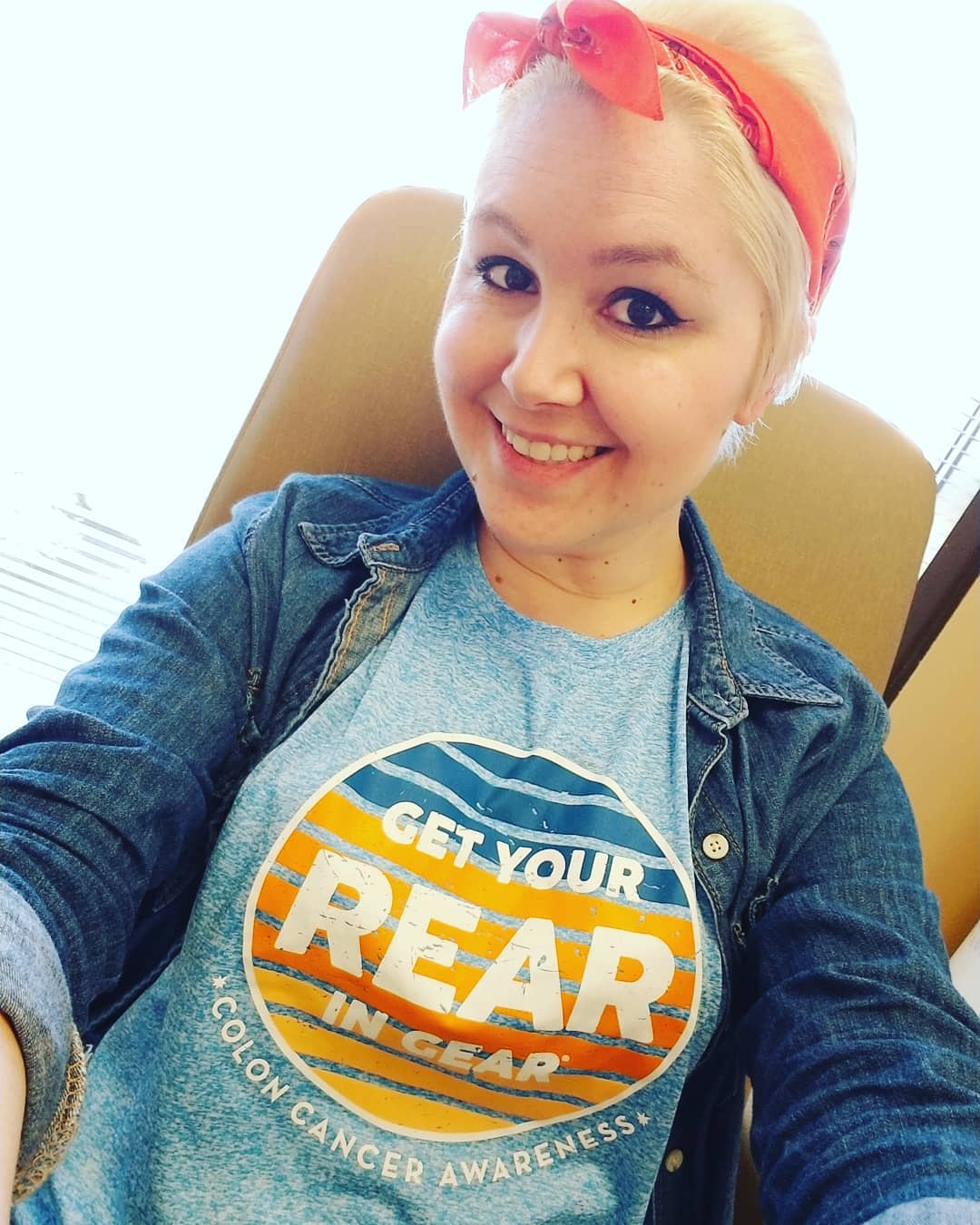 I was 29 when I was diagnosed with stage IV colon cancer. It started when I saw blood in my stool along with constant bathroom trips. I went to my primary care doctor and he said it was just constipation, that at 26 I was too young for a colonoscopy. I ignored my symptoms for two years because of that diagnosis. In May of 2017, I started having a rapid heartbeat, would feel exhausted after walking a lap around the mall, and occasionally getting really light headed. I ended up in the ER. They ran tests on my stool, found blood in my rectum area, and ordered a colonoscopy for the next morning. They also said my hemoglobin was at a seven, which meant I needed a blood transfusion. I was scared when I found that out, but I got through it.

During my colonoscopy they found a couple of polyps, which were removed, and a large mass that they couldn’t remove in my sigmoid colon. Another colonoscopy was ordered for a couple weeks later to investigate it more. During the next one, they took a sample of the mass and did a biopsy. They said it was non-cancerous, but they wanted to have surgery to remove my sigmoid colon and get rid of that mass completely. The surgery would be laparoscopic so I would only have three 1-inch incisions and it was scheduled for July. In the meantime, between May and July, I got engaged to my boyfriend and life couldn’t be any better besides that surgery.

I had my surgery and was in recovery for about six days or so. The biopsy they did during the colonoscopy turned out to be a non-cancerous piece of the mass, so I thought this would be smooth sailing. Not so much. Before I was discharged a doctor came in and told me that the mass was cancerous and that they removed 28 lymph nodes but only one had cancer. I didn’t really have a reaction to the news and said, “Okay, what next? I’m ready to take this on and beat it.”

My original diagnosis was stage III. I met my oncologist who is the coolest doctor ever, which made for a much more positive experience. He wanted me to get a CT scan and an MRI. These showed a spot on my liver. It was super small; not even the size of a dime. This was officially stage IV. I would have six months of chemo, which meant 12 rounds total every other week. I could either choose from CAPEOX or FOLFOX. I chose the CAPEOX which was Oxaliplatin and Capecitabine pills. I thought that would be easier than carrying around a pump (FOLFOX – 5fu). I was wrong.

First day of chemo I got so sick on the pills I admitted myself to the hospital. My doctor called me while I was there and said we will try FOLFOX instead. I was okay with that and it went pretty smooth for the first half. I didn’t really experience bad side effects. I had some nausea, little to no hair loss, tingling in hands and feet, and hand cramps. Those were minor in my opinion, but they always wanted me to mention if I was experiencing those side effects. I also had a really bad side effect that lasted a total of seven days – cold sensitivity – that was due to the Oxaliplatin. Basically, you can’t have cold drinks or it will feel like pins and needles are in your throat; so awful. I normally don’t drink warm or room temperature drinks so I basically dehydrated myself and had to get fluids frequently because of this.

My doctor wanted me to get a liver resection on my right side to remove 65 percent of my liver because of that tiny tumor. That surgery would happen in February, so I had all the time in the world to prepare for it.

During my fifth round of chemo around Christmas, I had another scan and received a call at work from my doctor. He said the tumor in my liver was gone. I started crying and kept asking, “Are you serious?” I was shocked that my body was responding so well to chemo, it was a wonderful Christmas gift, yet he still wanted to do surgery since there could be tumor residue on my liver. Better safe than sorry. He said we were postponing chemo for surgery so my body would have time to heal from the previous rounds of chemo. I enjoyed life like crazy during that time, better yet, it was the holidays! He then called and said he wanted to squeeze one more round in. I got so sick during that treatment that I ended up having to go to the ER that weekend for fluids and then going into infusion twice that week for more fluids. It was bad.

My liver resection surgery went very smoothly and I was told there was no sign of cancer in my liver at all! I was in pain after I got home but it was manageable. I was in recovery at home for six weeks, which was annoying. I hate missing work and like to keep busy, so sitting around all day was not fun for me. When I was ready to go back to work, we talked about my seventh round, which turned out to be worse than my sixth. I got more sick and it was just miserable, not to mention I had severe neuropathy in my hands and feet, which actually started during my fifth round.

When I went in for my eighth round, my doctor told me he thought it would be for my best benefit and quality of life to stop Oxaliplatin. I was so happy but scared. Happy because I could enjoy cold stuff again, but scared because I was worried the cancer would return from cutting it off. He said I should be fine, so we continued with just the pump, but I just felt nausea for the next four treatments. Then before I knew it, I was all done!

My motto during this whole journey has always been: “Stay Positive” or “Positive Vibes.” During my whole treatment I always tried to smile. Keep that positive attitude and keep enjoying life. I wasn’t going to let a cancer diagnosis bring me down. I knew I was going to beat this and I DID! The funny thing about this whole journey was that everyone that I came into contact with said they would have never known I had cancer or was going through chemo. I found that nice hear, because I was always pretending I didn’t have it so I could just enjoy life. I hid my cancer very well, I never lost my hair completely, but did cut it off since it was thinning.

I will admit that I had moments of depression and moments where I would cry. No one ever saw that side except my fiancé, who is now my husband. I do keep a blog as well, that helps me through the hard times and keeps close friends and family up to date with my progress. I will say to anyone diagnosed, you should blog, vlog or talk to someone, because it does help. Also, I do know it’s hard, but please try to remain positive. Keep telling yourself “I will beat this” or “I will get through the bad days.” It will be okay. You got this! I am currently in remission as of 7/17/2018 and have scans every three months to make sure everything is okay. It’s been a long two years, but I am feeling great now! PLEASE do your routine colonoscopy and watch out for signs of colon cancer. I never want to see anyone go through what I went through.