By Annelise RittburgMarch 31, 2022Faces of Blue 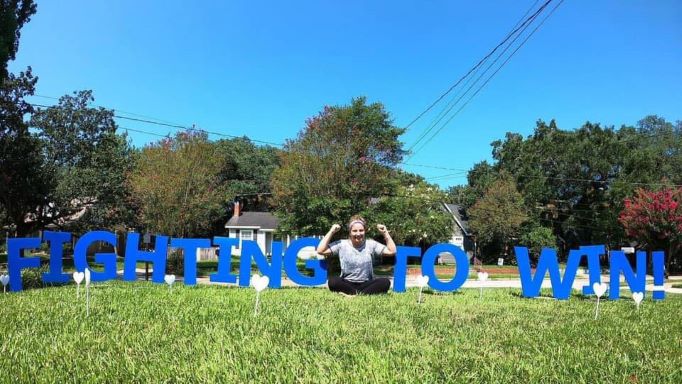 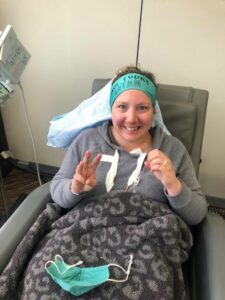 “I love you girl, go get your treatment.” These are the words of encouragement that Emily King’s oncologist tells her whenever she goes in for another round of chemo. At 29-years-old, Emily is an expert chemo patient, having completed 35 treatments in two-and-a-half years.

Emily’s experience with cancer began in 2019. Up until that point, she was young, healthy and active. She was an avid swimmer, first grade teacher, and involved in her church community with her husband, Brady.

But in April 2019 she first noticed blood in her stool. She asked some friends with medical training and they advised her that if it happened again, she should go to the hospital. After her second bloody stool, Emily got a colonoscopy at the hospital that confirmed that there was a mass in her colon. The mass was biopsied and two agonizing weeks later the diagnosis was confirmed – Emily had stage III colon cancer at age 27. 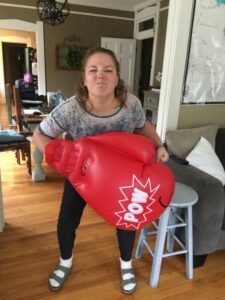 She underwent surgery to remove the mass, but the healing went wrong. Emily ended up with scar tissue that ran through her colon and created a severe bowel obstruction. This began a long process in and out of the hospital with different treatments and additional surgeries to remove both her appendix and gallbladder. Eventually, Emily was set up with a temporary ileostomy bag that was reversed after more chemotherapy and scan declared her all clear.

Unfortunately, three months later, she received the bad news that cancer spread to her lungs. This news was followed by more chemo, another all clear, and then once again finding cancer in her colon and also her lungs.  She recently began a new immunotherapy drug to fight her stage IV cancer.

Chemotherapy is a harsh drug and the repeated treatments took a toll on Emily’s mental and physical health. To deal with some of the side effects, Emily turned to natural remedies like peppermint and ginger. She found that staying hydrated was key for fighting dryness and headaches. When she was too tired to read or color, she would fall asleep listening to music or a guided meditation. 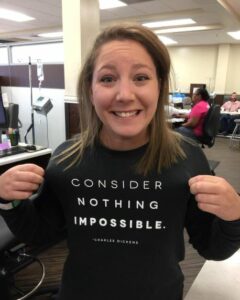 A friend gave her a blanket that was prayed over, and Emily took that with her to treatments. Through intense back-to-back chemo treatments, Emily found ways to listen to her body and bring along objects that provided emotional and physical comfort.

Emily started sharing her tips and tricks and favorite products with other people she knew who were also undergoing chemo treatment. She put together boxes and threw in some of her favorite ginger candies for nausea, some lotion for rough dry skin, and a number of other items along with a letter outlining tips for dealing with different side effects. Emily gifted a box of goodies to her dad’s coworker who remarked that “everything in the box has a purpose.”

Emily was praying for her own purpose during this uncertain time in her life, and realized that she had something special to share with other chemo patients. She and her husband Brady formalized the chemo box project into a nonprofit called Fighting With Hope. What started as an informal way for Emily to support other people in the cancer community has grown into a full-fledged organization that sends boxes all over the country.

While the boxes themselves are mostly full of tips and practical items (such as tea, eye masks, and food delivery gift cards) Emily says they also send hope, including messages of support and encouragement in each box.

She says that the past couple of years have been unimaginably difficult and uncertain. Despite the difficulty, Emily reports that “I shouldn’t be happy right now, but I am.” She has an amazing support system including her family, friends, church community, and her husband, Brady. Emily has found a deep community among others fighting cancer, people displaying incredible hope and strength. “I just want to love on them,” Emily says, “to show them my support.”

You can learn more about the chemo box project, donate, or request to send one to someone dealing with cancer at or order one through the Colon Cancer Coalition online store. 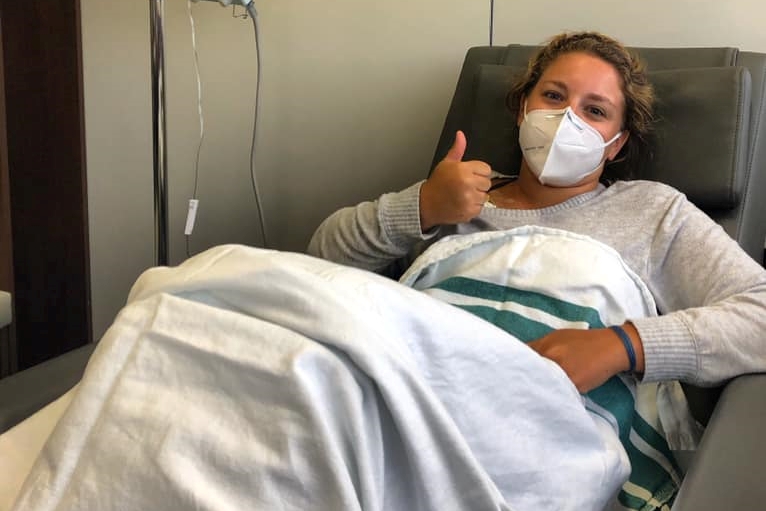