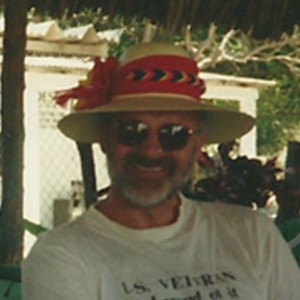 My dad tried many treatments at Abbott Hospital with several different oncologists and many different therapies, as well as a treatment center in Chicago. In 2003, he fought this deadly disease for one year, four months and 22 days.

He was the kind of dad that was always there, even as a teenager, when I wanted to just be with my friends, I still knew he was always there for me.  He took the family traveling, taught my sister and I how to give, was an amazing listener, and seemed to just know about everything.

He owned his own business in heating and cooling called Temperature Control, where he loved helping people and figuring out problems.

My dad was a handy man; he enjoyed doing projects, around the house, or for others.  He had quite a sense of humor, that some understood, but others didn’t, sometimes I didn’t even get all his jokes!  He liked watching football and would get really in to it.  We had recently got a cabin, and he really liked hanging out there and doing projects.  He really liked dancing with my mom to oldies and with my sister and I.

He was a great breakfast maker; he made wonderful pancakes in fun shapes.  He could fix anything around the house; I never even knew that other dads hired people to fix things.  He had the talent of being able to speak to anyone about anything and often did.  He also took very good care of his roses.  He was the block leader and tried to continue to keep the neighborhood safe.  He also always grilled the sweet corn at the block parties-like from the State Fair.

He loved his family so much.  He would always much rather go shopping for dresses and makeup then go golfing, fishing etc. as long as he was with us. He was my one and only awesome dad.  He wasn’t a saint, but I know he’s an angel now. He just tried to make the best out of any situation, all the way till the end.