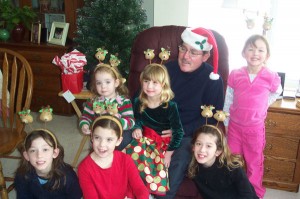 Dad was 60 when he was diagnosed Stage III Colon Cancer.  His surgeon came out following surgery and told him that he would have been able to save him if he would have had a colonoscopy at 50. After the surgery, Dad told us that he had known that something was “not right” for awhile. Dad bravely fought colon cancer for 4 years. He went through several surgeries, chemo, and radiation. He never let anyone “give up” on him.

Dad enjoyed everything in life, from fishing in Missouri, riding his Harley, spending time with his friends. He served two tours in Vietnam in the Navy, and was very involved with the AMVETS, he was award Veteran of the year in Cedar Rapids in 2006. Most of all, he enjoyed spending time with his family and his six grand-girlies.   Dad knew how to fix everything!  He loved tinkering with all kinds of things; there was nothing he couldn’t fix around the house. While he was receiving chemo, one of his favorite things to do was to fix the portable DVD players on his unit…sometimes I wondered if his nurses purposefully “broke” them before he came! He could out fish anyone, and would catch his limit before anyone else even had a bite on their pole!

Dad was a friend to everyone he met. He taught me so much about helping others. He was a really neat person, and I am so proud of him. My Dad should not have died of colon cancer. He died because he did not get tested. He was too embarrassed. His embarrassment cost him and us everything. After he passed away, I found out that he had been telling everyone he knew or met to get a colonoscopy, and that several people were tested and had polyps removed because of him. It was then that I realized that he had been getting out the message, and that it was my job to keep it going.