By Rosalyn ZirngibleMarch 3, 2015Faces of Blue 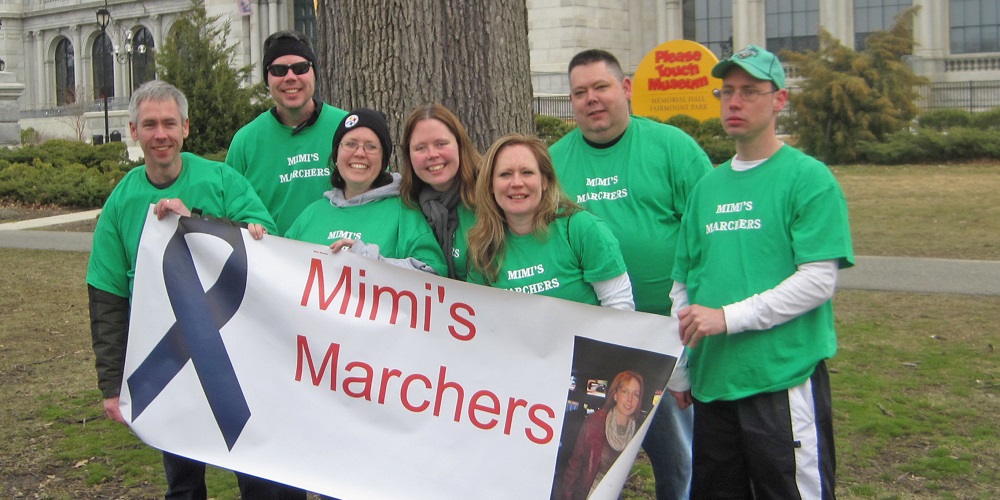 Written By: Kevin Hoffman, in memory of his sister. My sister, Ann Marie (Hoffman) Pierson, was just 35-years old when she passed away on July 2, 2012 after a 2 ½ year battle with colon cancer. She was a loving wife and mother of two young children. She was also one of eight children.

In November 2009, shortly after her son Nate had celebrated his 1st birthday, she began feeling sick. It was during a trip to the emergency room that she and her husband received the devastating news: colon cancer. The doctor recommended that her seven siblings get colonoscopies immediately. This gave Ann Marie a sense of purpose, and her diagnosis, may have helped to save the rest of us.

Her doctor at the time was not optimistic of her prognosis and told her simply to go home and “enjoy her remaining time with family.” Angered (and stubborn), Ann Marie decided that she would fight instead of give up. She switched hospitals and found a doctor she truly loved and respected, a doctor that gave her hope in the fight, hope that with the right treatment, the impossible could be possible.A cancer diagnosis can change a person and Ann Marie was no different. She decided she would do whatever necessary to survive. She would not accept “no this won’t work.” She researched standard and alternative treatments to help her keep the cancer at bay. She also lived each day as though it was her last. Things began to improve immediately. It was hard to believe she was a stage IV colon cancer patient. She worked every day. She didn’t lose her hair or get sick from the chemo. My sister was able to maintain a sense of normalcy for her husband and two young children.Ann Marie made it her mission to help others diagnosed with cancer. During her illness whenever she heard about someone who was sick, she’d contact them and help by sharing alternative treatments she had used and her personal experiences.

By January 2012, two years after her diagnosis, the negatives began outweighing positives; yet, she worked and battled to the very end. Her strength and endurance was amazing to watch. We never realized how incredibly strong our sister was. Ann Marie showed us what it looks like to fight for your life with grace and dignity.My sister was young, she wasn’t “due” for a colonoscopy for over 15 years, yet by the time it was caught the cancer had already spread and was stage IV. Looking back there may have been symptoms that she ignored or dismissed because she was so young. It is my hope that one day organizations like the Colon Cancer Coalition and the Get Your Rear in Gear races will have raised enough awareness and screening rates will rise so other families will not have to experience what my family has. That no more children will be forced to grow up without a mother as my niece and nephew are. As a result of my sister’s diagnosis my siblings and I were screened, several of us had polyps that were removed and we will continue to be screened as our doctors recommend. Colon cancer can be prevented when doctors remove polyps before they become cancer. Ann Marie’s illness may have saved our lives.

Kevin Hoffman is a volunteer event director for Get Your Rear in Gear – Cleveland. This 5K Run/Walk will be held on Saturday, October 3rd at Edgewater Park in Cleveland.