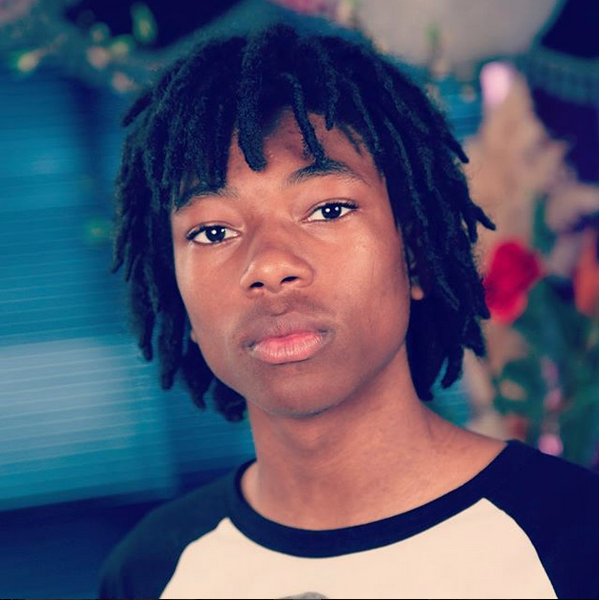 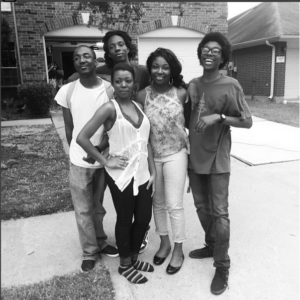 As a nurse, Yunaka Baham couldn’t believe that her 16-year-old son, Michael Alexander Robinson, fondly called “Alex,” would be diagnosed with colon cancer.

“If you would’ve ever, in a million years, told me that someone like him, with no familial history, would have colon cancer, I’d be like, ‘Yeah, right.’ This goes against everything that we learned in school.”

Alex had issues with reflux from time to time, and in some cases it would get severe enough his mom would take him in to see his pediatrician. Other misconceptions arose where physicians thought Alex may be bulimic, but Yunaka knew he wasn’t. No other tests were done because there were no significant signs and changes in Alex’s health. 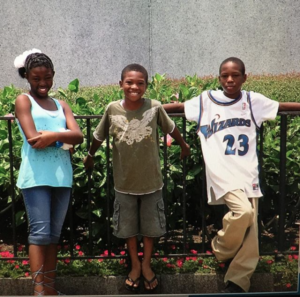 Instagram post: January 4, 2017; “Wishful Wednesday. With the extent of disease found, they speculated; Michael has been sick since somewhere around this age.” He was 7 years old in this picture.

In July of 2015, after Alex was in the hospital for a week and a half for testing and treatment, Yunaka took him to a pediatric clinic where the oncologist broke the news.

“I knew he had some type of cancer, I just didn’t know what type. So we go to the clinic and one of the oncologists is talking to us, and Alex is sitting on the table and his [the oncologist’s] assistant breaks down and starts crying. And so at this point, there’s a pit in the bottom of my stomach that’s just like, ‘Okay, this is horrible.’”

The tests had come back positive for colon cancer. “I was speechless because I’m trying to figure out, ‘Well, how did we get to colon cancer?’ Again, everything that I knew, it just wasn’t supposed to be colon cancer.”

The oncologist then went on to give Yunaka options on what to do in the coming days. Because of the progression of the disease, she needed to make quick decisions about treatments for Alex.

“Typically with colon cancer, it’s not a really fast growing type of cancer, which means that Alex had been sick for a while by the time we found it.” 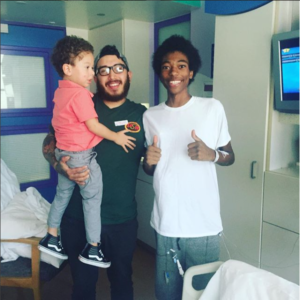 Yunaka, however, needed time to make those decisions. They were at a pediatric clinic, and because Alex was 16-years-old, he had input into the decisions of his care. “And so he’s totally speechless and you can see the anger starting to set in.”

Yunaka and Alex went home after the diagnosis to a house full of family and friends who were ready to celebrate good news. “And I was like, ‘Well unfortunately, we won’t get to celebrate the way you all think we’re going to celebrate. But we’ll celebrate the fact that he’s still here, and we can make some positive changes moving forward.’”

The first week was occupied with follow-up appointments and more testing. The following week, Alex had his port-a-cath put in, but wouldn’t leave the hospital for another month. His bowel had become obstructed to the point where he couldn’t eat or defecate.

“They had him on FOLFOX, which is the oldest colon cancer treatment ever. I think that’s one of the things that angered me is 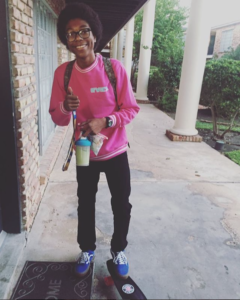 that we’ve been dealing with colon cancer for quite a while, but we haven’t truly changed the treatment regimen to help people live longer with it.”

“That became our life. At that point, they told us he would only have about less than six months to live and it was truly up to me in terms of what I wanted to do with him at that point. We traveled as much as he could, every other week we have to go to the hospital and he had to actually be admitted into the hospital with each round of chemo. We did hospice at the very, very end.”

It was suggested that Alex not attend school because the doctors felt it would take too much out of him, but Yunaka knew that she couldn’t keep him from being a kid. Alex was an avid skateboarder, who even got the chance to design two skateboards before he passed. “He skateboarded until he got to the point where he just couldn’t walk anymore.” That would be in February 2016. 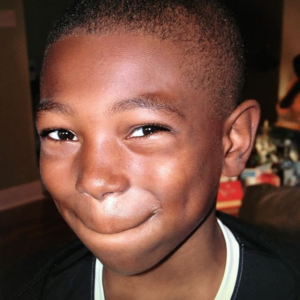 “December of 2015, we had gone home for Christmas, and after we got back to Houston, he decided he didn’t want to do the chemo anymore. So we went to the clinic, which was the January 1, 2016. He also wanted to visit some of his other options so of course we went other places to get second opinions; see if they would change anything, but again, it’s colon cancer. The treatment has been the same forever.”

Alex opted out of the chemo and Yunaka knew it was what he wanted. “I think he thought he would get around it somehow. And of course I supported his decision because, by this point he’s 17. He only had a few more months before he was 18 and he would be able to make full decisions on his own, so it’s like, ‘well, we might as well start now because if he gets to the other side of this, he’ll have to deal with the repercussions of every decision he makes’.”

After stopping the chemo in January, Alex’s ostomy started to swell and the pleural effusions started to grow. They decided to go see a pulmonologist who dealt with cancer patients, to see if there was a way to drain some of the pleural fluid and make Alex a little more comfortable. “Alex decided, ‘I don’t want to walk around with all of these things attached to me.’” So they decided against seeing the pulmonologist, but fluid filled his abdomen. 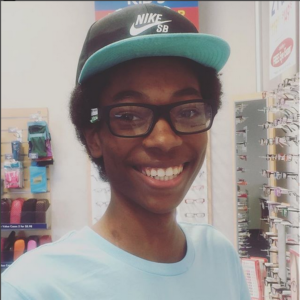 “[Alex] had a lot of fluid with nowhere for it to really go. By February we ended up in the hospital, and at that point there were some ethical issues that we had to deal with. The hospital felt like they needed to deal with it. I’m a mom so my number one goal was to make sure, whatever his wishes were, were fulfilled however that came to be. We ended up staying at the hospital at this particular time for maybe two weeks.”

The hospital eventually would let them go home, and Yunaka knew that that was the best decision. “Whatever we have to do to get him home, that’s what we need to do. I just could not see him dying in the hospital, so at this point we went home with hospice. About two to three weeks later, he was gone, but it was a good two to three weeks, maybe a month he was on hospice. We would have to bring his oxygen everyday so he could get out of the house and go do things until he just couldn’t anymore.” 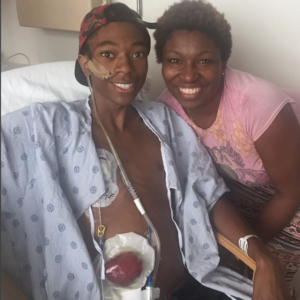 Others described Yunaka during this time as stoic, while having to be both a mom and a nurse. She knew that she had to help Alex live his best life with the information provided along with her nursing knowledge.

“I can remember after we left the hospital the second time in 2016, just sitting at his bedside praying, and telling God what my wishes were at that point: ‘If I can’t have him the way you gave him to me, which was full of life, then I want you to take him.’ We sat and we had a talk and I was like, ‘You know you do not have to try and hold on for me. I’m going to be okay.’ And I think once we had that conversation, he was okay with whatever happened. He still wanted to fight and still did the things that came natural to him; that he was able to do, but I think that was some of his concerns; ‘Is she going to be okay?’ and I was like, ‘I’m a big girl. I’m going to be okay.’”

Yunaka said that Alex was a cool and interesting kid, having touched a lot of lives. They had only moved into their community a year and a half prior to his diagnosis. Alex was in his senior year when he was diagnosed, 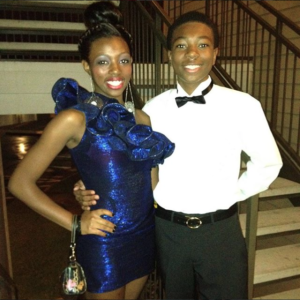 yet still impacted many of the students there. “There wasn’t a day that went by that there weren’t 10-20 kids, different kids, from all walks of life, every nationality, that came to our place to make sure he was okay.”

Yunaka has taken over Alex’s Instagram account (@toddlerodd), from the suggestions of his friends. She was hesitant at first, but his friends all agreed that because they loved him so much, they wanted to see updates and keep his memory alive. She  currently gets messages asking if there will ever be a birthday party to celebrate Alex. His birthday is in August and he would be 20 in 2018, but Yunaka isn’t yet ready to have a big party.

Alex was pretty private in life, not wanting others to see his struggles. After taking over his account, Yunaka has posted some graphic pictures of Alex during his treatments, in hopes of sharing where he was and what he went through for those who did not get to see everything. 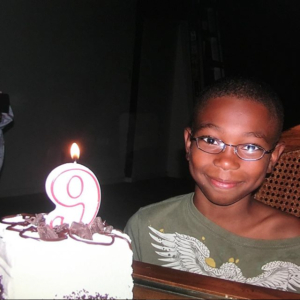 Yunaka isn’t currently active in spreading awareness of early age onset colorectal cancer. She is slowly taking her time with Alex’s Instagram account first. “Most of the people that have the various Instagram accounts related to colon cancer, they’re all filled with adults, or older adults and rarely do you see teenagers. So if we can help change the perception of who colon cancer affects, that would be ideal. I think there’s a misconception that young kids, young people, particularly kids, don’t get colon cancer. I think if we brought awareness to it, and made people aware that it could possibly happen, not to them, but to someone that they know, than pediatricians will look for those signs instead of just passing it off as regular GI issues.”

“I’m not actively involved just because I’m trying to get myself together. But this upcoming year my plan is to be a bit more active and possibly join forces with a group that I can work with to bring awareness to the community. That, ‘Hey, it starts early.’ And it doesn’t necessarily have to be someone with a familial history, because typically when you think of kids with colon cancer, you think, ‘Oh well there’s got to be a family history.’ I don’t have a family history, my ex-husband doesn’t have a family history, but it happened.”

Being a nurse, Yunaka has come across other patients who “just should not have colon cancer.” She had a friend who passed two weeks ago from colon cancer, who was in her 40s. “Someone says to me, ‘Well that’s an old man disease.’ Well, yeah, that’s 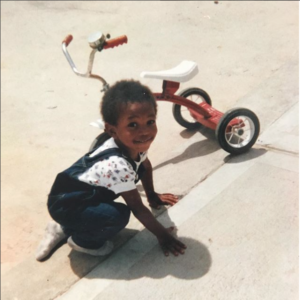 the thought behind it, you know. Insurance companies won’t pay for [screening] until you’re over the age of 50. It’s not an old person’s disease. I think now that I’m at a place where I can share, it’ll be easier for me. I have to help the community understand that pink isn’t the only cancer that exists.”

During Alex’s time in the hospital, he was given the opportunity for a wish with the Make-A-Wish Central and South Texas local chapter. “So the wish was he wanted to go to the moon; that was his wish. He became famous throughout the hospital as the kid that wants a trip to the moon as his wish. He didn’t get an opportunity to do it, but they’re working on being able to fulfill that wish in the future.”