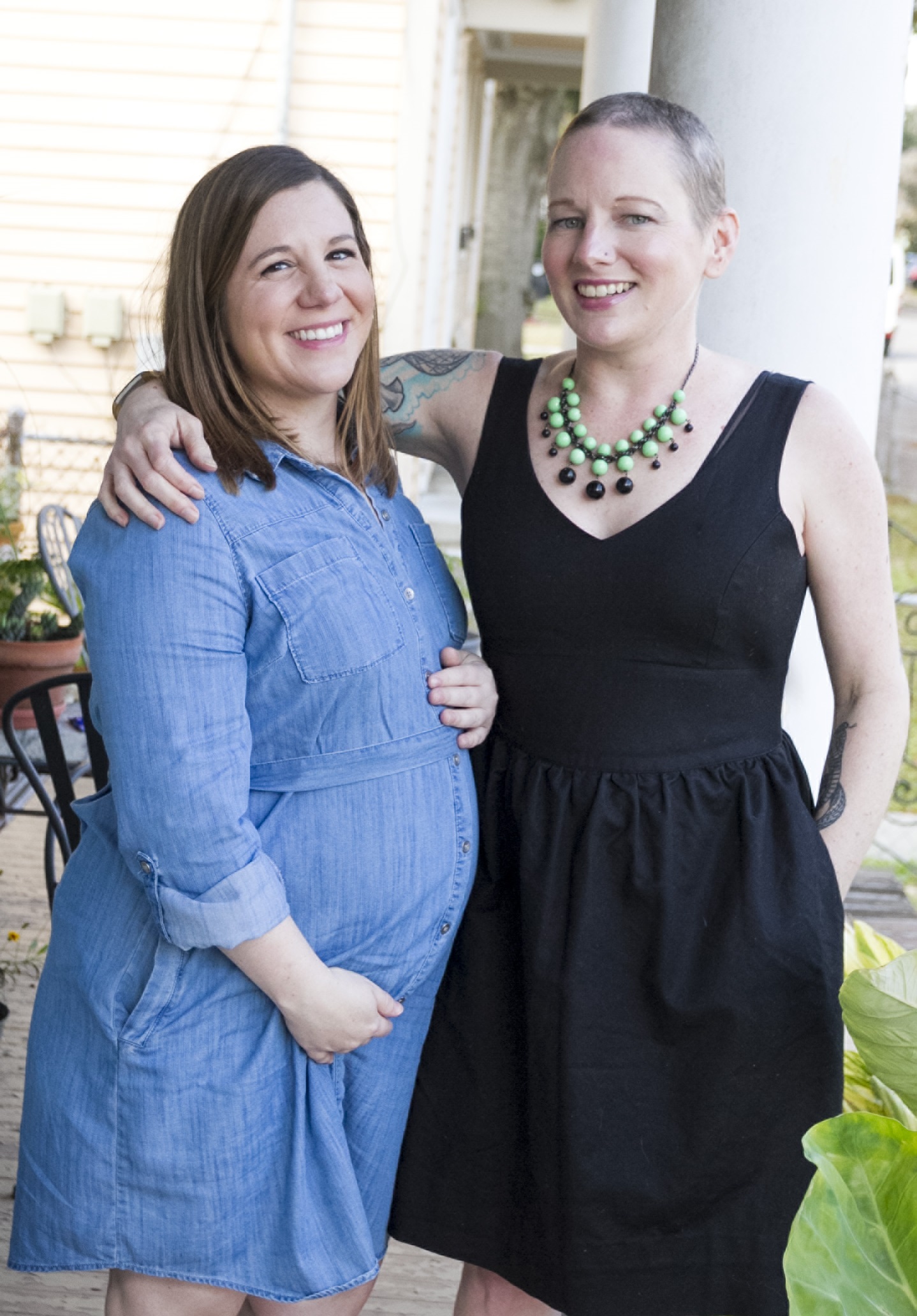 It’s sometimes hard to remember the ease of life before cancer. Cancer has a way of consuming your life, and unfortunately, my experience with cancer isn’t the first time my family has had a brush with colorectal cancer. In 2001 my dad died from stage IV colon cancer at 48 years old after a year of undergoing surgeries and treatment. My dad’s death sent a shockwave through my family and then, in 2018 we re-lived it all over again when I was diagnosed with stage IV rectal cancer at 38 years old. 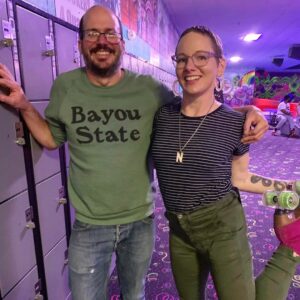 Prior to my diagnosis, I was riding the high of going back to school to pursue an MFA in creative writing and being in the best physical shape of my life. I was balancing writing workshops with training for 5K races and I had a part-time graduate assistant job with my school’s study abroad program, which brought me to Cork, Ireland for a month that summer. I had been to Cork once before in undergrad, so I was thrilled for the opportunity to go return.

I was walking around the city center in Cork, Ireland when I had the first (and only) seizure of my life. The plan was to stay in Ireland for a month and assist with running the program, then my husband was going to fly out and meet me so we could tour the country for a week before returning home to New Orleans. Instead, after two days of being in Ireland, I got a tour of the Irish health care system—not exactly the cultural experience I initially signed up for.

The seizure landed me in the hospital for a week. Instead of enjoying pints of Guinness and fish & chips with the students, I was holed up in a hospital room with five other women without a modicum of privacy while undergoing a litany of tests including an MRI of my brain. The results were inconclusive; the Irish doctors couldn’t tell if I had an infection or a tumor. (Later, back home in New Orleans, I found out it was the latter.) I mentioned my family history of colorectal cancer to my doctors, which spurred them to perform a colonoscopy, just to be safe. The doctors were “99% sure” my results would come back okay since I had not noticed any symptoms.

The test results came back not okay. They were, in fact, my worst nightmare. There I was, at 38 years old, with a tumor and two polyps in my rectum. After the doctors delivered the news I went downstairs to the hospital’s chapel and sat there and wailed, dredging up 17 years of emotion and fear from the darkest corners of my mind. In hindsight, I did have symptoms but I chalked them up to my new exercise and diet regimen that I had started following the past year. I was blindsided by the news. Just two months before I had completed my third 5k race. Now I felt like I was in a race to death.

I quickly realized that I needed to get back home to New Orleans to begin treatment and to be around friends and family so I could stop grappling with this diagnosis alone. Thanks to my study abroad insurance, my husband was able to get an emergency flight to Ireland so I wouldn’t have to travel back solo. He arrived a week after my seizure. The most direct flight to New Orleans wasn’t available for another five days, so we made the best of the situation and explored the city, trying to forget why he was there. I was prescribed steroids to keep the swelling in my brain down so I wouldn’t have another seizure mid-flight.

We arrived in New Orleans on June 27. The Irish hospital already scheduled an appointment with an oncologist, a colorectal doctor, and a neurosurgeon for June 28 to ensure a seamless transfer. My team of doctors in New Orleans wasted no time starting my care. After my initial consultations, I had a PET scan and another brain MRI. This time the results this time were conclusive; the mysterious thing in my brain was a secondary tumor. My medical team seemed as dumbfounded as I was that the cancer was able to travel so far in my body without affecting other organs.

I had brain surgery on July 5, which began a nearly year-long battery of treatments and surgeries including 12 rounds of chemotherapy and five rounds of radiation to eradicate the tumor in my rectum. I continued working part-time and maintained a full course load during treatment. Friends, family, and my oncologist marveled at my tenacity, even when I was hooked up to a chemo pump every other week. Continuing my education gave me a purpose and something to work towards that wasn’t health-related. I also had no choice but to push through; my health insurance was through the university and my GA position paid my tuition. Attending class wasn’t easy, especially during my chemo weeks. There were several times the chemo caused such intense cramping in my hands that I had to ask a classmate to put my books away for me. Sometimes I would catch myself nodding off in class and sometimes I couldn’t make it to class at all. Then there was the loneliness I felt of being a cancer patient surrounded by seemingly healthy students. I bit my tongue on more than one occasion when I overheard classmates complaining about their courses. 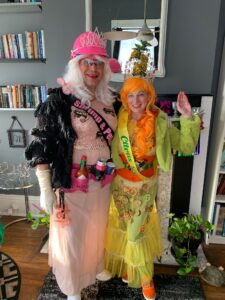 After that initial year of treatments and my temporary ileostomy reversal surgery, I went back to Ireland, which proved to be a cathartic experience. I was NED (no evidence of disease) and elated that treatment was behind me. I spent six weeks in Ireland and the summer of travel didn’t end when I got back to the States. I went rock climbing with First Descents, spent a week in Northern Michigan on Cassie Hines Shoe Foundation’s Base2Summit program and I went to AllyCon, the Colorectal Cancer Alliance’s annual conference. It felt good to connect to other cancer patients on these programs and it was the first time I was around people in my age group that had been through hell and back the way I had.

Unfortunately, I soon found out that I wasn’t done with treatment. A PET scan revealed that the cancer spread to my lungs and I would have to start chemotherapy a second time. As soon as I had enough hair to warrant a haircut, it was time for me to shave it all off again. This time, Covid hit when I was halfway through treatment, which added an additional layer of uncertainty. The dull grinding away of underlying stress and anxiety was amplified as I slathered my hands in hand sanitizer (when I could finally buy it) and constant mask-wearing. Still, I was able to not only graduate with my Master’s but I was also accepted into another MFA program, this time for Studio Art with a focus on photography. I’ve always been a writer but photography is something I only started getting serious about six years ago. I was thrilled at the acceptance, especially since I have no formal training.

Now, a year into the pandemic, I’m balancing school and cancer treatment for a third time. I finished chemo and radiation last July, had a four-month break in treatment, then found out that my tumors grew. This time, I’m chemo for life— tough news for someone fresh into her 40s. Sitting with our own mortality is harrowing but I’ve been slowly making peace with it. I know there is only a 15% chance of reaching the five-year mark for stage IV cancer patients but I also know that my tumors continue to respond remarkably well to treatment. My last PET scan revealed that my tumors are disappearing and dying. I may even get a break in treatment (hopefully) in the near future.

The writer Anatole Broyard wrote that when your life is threatened, you can either turn toward the knowledge of having an illness, or you can turn away from it. He chose to turn towards his illness, creating “a tacit agreement between my body and my brain.”  When my dad died I was blindsided by the news. He suffered from the same cancer I have but, at 21 years old, I was in denial that death was a possibility. A stage IV diagnosis is petrifying, but rather than getting caught off guard again, I chose to accept my reality instead of turning a blind eye to my situation. Accepting my reality felt like an insurmountable task, but there’s also comfort in choosing to swim with the tide instead of fighting the waves back to shore.