You are invited to the most important mission on Earth: #MissionToUranus.

In recognition of Colorectal Cancer Awareness Month, we are excited to partner with cross-cultural agency BeautifulBeast and invite the world to join the most important mission on earth: #MissionToUranus. 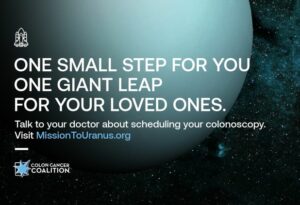 The campaign kicking off tomorrow (March 1) will live predominantly on Twitter, targeting the most influential space enthusiasts and inviting them on a #MissionToUranus – a mission to get Americans screened for colorectal cancer. A series of radio public service announcements (PSAs), billboards, and social media complement the effort to spread the word about the importance of getting screened for colorectal cancer to save mankind. 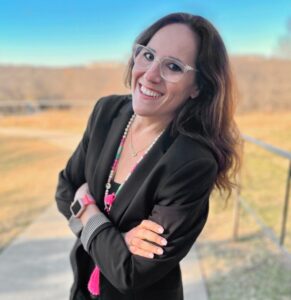 The team at BeautifulBeast has donated their time and creativity to this initiative. They are the group of creatives behind the SafeWordColonoscopy campaign from March 2020. this effort is lead by Flor Leibaschoff who lost her brother to colon cancer after battling it for almost seven years. He passed away when he was only 44-years-old.

“Colon cancer is the third most common cancer in America,” said Leibaschoff, Chief Creative Officer at BeautifulBeast. “The #MissionToUranus campaign is a powerful way to highlight the importance of colonoscopies, using levity as our wingman. As an ad agency, BeautifulBeast knows the power of raising awareness through joint efforts, and that is why we were excited when we heard that Dick Covey, a former NASA astronaut, wanted to join #MissionToUranus himself, helping us amplify the message.”

“This mission is personal to me,” says Dick Covey, former air force pilot, space shuttle astronaut, and aerospace engineer. “I lost both my father and my daughter to colorectal cancer. My daughter, Amy, was just 33 when she died in 2009. I have had many vital missions in life, but this mission to get people screened for colon cancer is one of my most important. I am grateful to be joining the Colon Cancer Coalition on this important effort to spread awareness and increase screening for colon cancer.”

The campaign features tweets inviting @elonmusk, @jeffbezos, and @richardbranson, along with other space enthusiasts, to join the mission, with the objective to make #MissionToUranus a trending topic.

In addition, the #MissionToUranus includes radio PSAs with a recruitment message to join the mission and a video billboard in the heart of Times Square in New York. The 10-second message will be shared a minimum of three times each hour, 22 hours a day, throughout Colorectal Cancer Awareness Month. 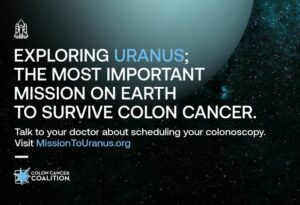 “We are very excited to work with BeautifulBeast on this important project,” says Chris Evans, president of the Colon Cancer Coalition. “We know this is a very personal project for their team, and we love the creativity and digital strategy they bring to the efforts of increasing screening rates for colorectal cancer. This campaign aligns with the mission of the Colon Cancer Coalition. Our objective is to get Americans screened, on time, for colorectal cancer, and if we have to go to space and on a #MissionToUranus to make that happen, that’s what we’ll do.”

Colorectal cancer screening should begin for most average-risk adults at age 45 and earlier for those with a family history or other risk factors. In addition to a colonoscopy, many screening options are available, including several tests that can be done in the privacy of your own home. Colonoscopy is the only screening test that can also prevent colorectal cancer by removing pre-cancerous lesions, or polyps, at the time of the test, preventing cancer. Colorectal cancer is highly treatable when diagnosed in the earliest stages. Individuals of all ages experiencing symptoms should talk with their doctors about screening options right for them.

In addition to the BeautifulBeast team, we also want to extend our sincere thanks to Latina Digital Design Studio in Bogotá, Colombia; Deaf Mule Audio Post in Dallas; digital agency 270B in Frisco, TX, for donating their creative expertise. We also want to recognize Ro2 Media in Dallas, TX for donating significant media exposure for the #MissionToUranus efforts.

See the entire campaign at www.MissionToUranus.org.

BeautifulBeast is a business growth company dedicated to cross-cultural solutions through creativity and big data. The name symbolizes the perfect balance between the beauty of a great idea and the beast that big data represents. While the agency’s DNA is Hispanic, it embraces its multicultural background, allowing it to seamlessly navigate across cultures to connect brands with the right audience. The agency’s founders have worked together for over 20 years, contributing to the success of their clients. BeautifulBeast has operations both in Dallas and Miami. 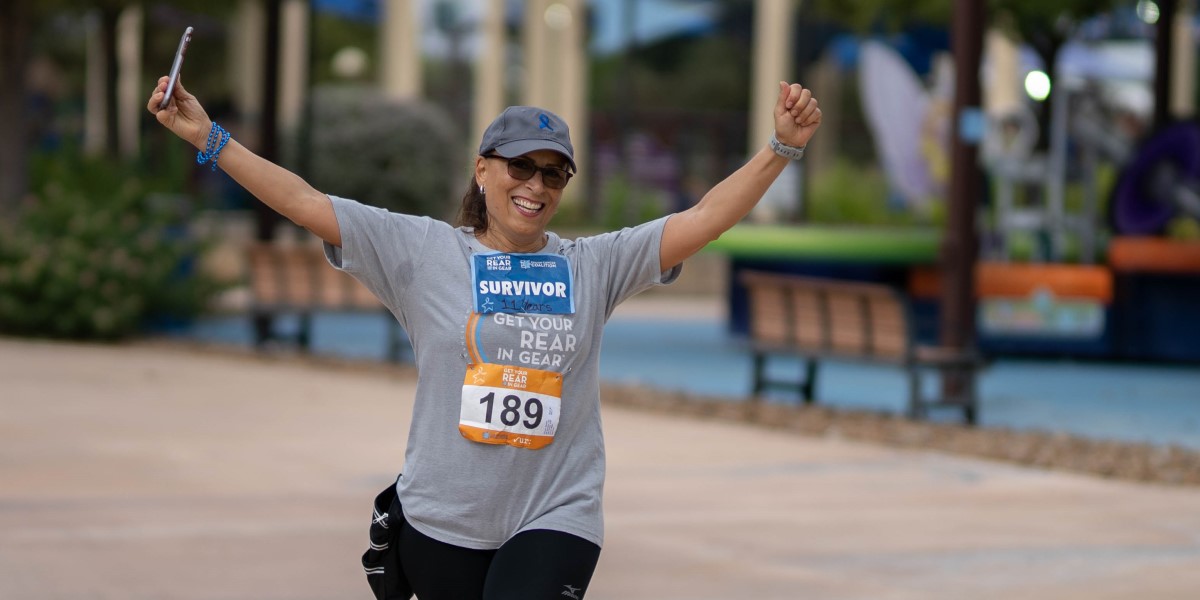